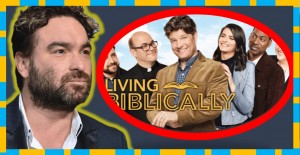 The actor, who plays physicist Leonard Hofstadter on the CBS hit comedy series “The Big Bang Theory,” has taken his talents behind the camera for his new series, serving as the executive producer for the show about a man named Chip Curry (Jay R. Ferguson) who decides to change his life and live strictly by the Bible.

Galecki, 42, said it was crucial to do a show that follows someone of faith, a demographic he said is underrepresented on TV.

“When I started my production company, it was No. 1 at the top of the list to try to do a comedy about religion,” he told journalists at the panel at the Television Critics Association’s Winter Press Tour. “I recognized that these conversations [about religion] weren’t being had despite the fact that … 80 percent of people in the world subscribe their lives to some sort of spiritual belief.”

As a result, he set out to create a show that could “inspire a conversation around the watercooler” about the Bible.

“One of the biggest hurdles is the fear to have the conversation about [religion]…” he said. “The best way to approach [a topic] that people may be uncomfortable with it is with comedy.”

Galecki recalled his own “hippie Catholic” childhood that he said involved a lot of sitting around on the floor crossed-legged and singing with guitars about religion. His mother spent “many years” in a convent before she married his father.

“There were a lot of elements of Catholicism in my upbringing,” he revealed, adding, “There are a number of people involved in the show who are devout with their beliefs.”

The show, created by Patrick Walsh, has taped a 13-episode first season so far. Walsh said the show worked with various consultants to be sure the scripts for the sitcom were accurate and respectful.

“We have a priest and a rabbi read every draft of the scripts and tell us where we are wrong or where we could use a better example from the Bible,” Walsh explained.

“Living Biblically” features Jay R. Ferguson, left, as Chip, who decides to live his life in accordance with the Bible.  (CBS)

Galecki said he was disheartened by early speculation that the show would be “scathing and sarcastic” in its portrayal of a religious lead character.

Walsh said that’s the opposite of what the show has set out to do.

“I think, hopefully, [people of faith] will find this show a cool take on what a lot of people base their entire lives around,” he said.

Galecki was uplifted by the reactions he received from religious studio-audience members during the live tapings.

“…There was one shoot night where the audience wasn’t as raucous as they had been in previous tapings, and I couldn’t figure out why so I talked to [the company that gathered the audience]…and they said the only difference was that this was the first… live audience where there wasn’t a religious group there,” he recalled. “And that was so galvanizing to us. Like I almost get misty-eyed talking about it because our fear was such the opposite.

“Our fear was that we might offend those people who we deeply, deeply respect and want to represent in a very sane, grounded, respectful manner. So the fact that we weren’t turning those people off, the fact that they were invested in the show just made us feel like ‘OK we’re on the right track at least.’”

Going forward, he hopes the new show will be able to “really to inspire a conversation” about religion.