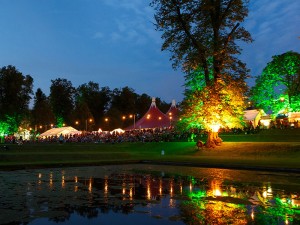 LONDON, UK (ANS) — Greenbelt, the biggest Christian festival in the United Kingdom, featured Muslim worship for the first time this year, according to an article by Catherine Pepinster for Religion News Service (RNS).

RNS reports the decision by organizers of the annual festival — which began more than 40 years ago as a gathering that drew about 1,500 young people — has stirred some controversy, according to organizers.

The news agency said Greenbelt now draws a much larger crowd of about 20,000 over the August Bank Holiday weekend in the United Kingdom (Aug. 25-28), and offers not only music but also theological discussion and opportunities to work on social justice issues.

RNS said that while it sprung from evangelical Christians, in recent years Greenbelt has expanded to include a much wider range of participants, including an occasional Muslim speaker. But this is the first year it is has made a concerted effort to feature Islamic culture and spirituality as a significant part of the festival, which included instruction on Sufi chants — described on the Greenbelt website as “a unique form of mystical worship.” The chanting was taught under an oversized tent at Greenbelt devoted to Islamic art, culture and spirituality, the news agency said.

Greenbelt’s creative director, Paul Northup, said including Muslim worship at a Christian festival surprised and upset some people. “There has been some negative and quizzical reaction from die-hard supporters of the festival,” he said.

But there was also healthy curiosity about the new Muslim component of this primarily Christian gathering, which takes place on land surrounding the stately Boughton House in Northamptonshire, in the English midlands.

Programming related to Islam this year was funded by Amal — an organization that promotes Islamic culture and arts. The events at Greenbelt will be curated by Chicago-based producer Asad Ali Jafri.

Amal is, in turn, backed by the Said Foundation, founded by businessman and philanthropist Wafic Saïd. Saïd made his fortune as a banker, and first came to prominence in the U.K. after helping facilitate the Al-Yamamah arms deal between Britain and Saudi Arabia — the biggest export deal in British history.

“The Amal funding was a game-changer,” said Northup. “Since 9/11, the Greenbelt trustees have wanted the festival to engage with Islam more deeply,” he said. “We wanted to play our part in dismantling, as far as we could, the extremist stereotyping and narrative the Muslim faith and community labored under and to introduce Greenbelters to Muslim thinkers, artists, activists and spirituality.”

Attendees had the opportunity to get to know Muslims who may not share their faith, he continued, but still share their values, and with whom they can make what is termed, “common cause.”

“The Common Good” was the theme of this year’s festival, which gave attendees opportunities to get involved with anti-poverty, LGBT, environmental, and other progressive causes. “It is because we are Christian that we do this. Not because we want to dilute or deny our faith. It’s because we want to be true to our faith and to continue to live and express it dynamically, creatively and generously,” Northup added.

Other events curated by Amal at Greenbelt this year included talks on culture and Islam, a discussion on the 70th anniversary of the partition and independence of India, and Christian and Muslim reflections on Black Lives Matter.