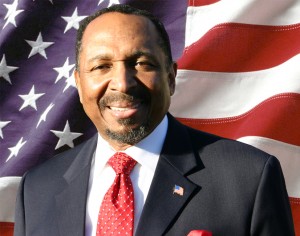 CLEVELAND, Ohio – Four years after releasing a video that called for Black Christians to leave the Democrat Party, Bishop E.W. Jackson is renewing that call, and calling for Black Americans to leave the Democrat Party. “After eight years of the first black President, the black community is worse off now than it was when he was elected. The Democrat Party has become nothing more than a metaphorical slave ship, holding black voters captive, taking them where they don’t want to go, while telling them they’re on a luxury cruise. It is time to abandon ship.”

In 2008, 96% of African-Americans voted for Obama. Jackson believes they got “nothing in return for their loyalty. Unemployment is up and income is down. There is more poverty, violence and murder in the inner cities, no jobs and more illegal immigrants to compete for the few jobs that remain.”

Jackson was confronted by a white protestor outside of the Republican National Convention who accused him of being a “sellout” to the Black community. Jackson urges Black Americans to send the same message he gave to the protestor: “Don’t tell me what it means to be a black.” Jackson says that it is time for Blacks to leave the party that treats them like a commodity and tries to dictate how they should think.

Bishop Jackson reserves his sternest warning for black Christians. “There is an historic clash between the religious liberty rights of Christians and the LGBT push to force Christians to bow to gay marriage. They have declared war on Christianity.”

The Bishop is telling Pastors across the country that “a vote for Hillary Clinton is a sin against God and the church.” Jackson says, “Trump has promised to restore the free speech rights of pastors and churches. He said he will defend our right to be true to the word of God. Hillary has threatened the church over abortion and marriage, saying, ‘Deep-seated cultural codes, religious beliefs and structural biases have to be changed.'”

Says Jackson, “Democrats have kicked God off their platform. Now they want to kick God out of the church. Black Christians must stop supporting a party and candidates who defy God.”