(Christian Post) – If Tim Tebow’s NFL career has been put on hold because of his Christian faith, country singer Blake Shelton has something to say about it. Shelton took to his Twitter to engage with fans in a conversation about why no NFL team has signed the 28-year-old devout Christian athlete.

“Just saw the 2011 playoff game with Steelers vs. Broncos. Can someone please give me a good reason [why] Tim Tebow isn’t playing in the NFL,” Shelton asked. “I mean are you telling me that there’s NOT a team that needs him out there? Look at the problems so many teams have at quarterback!” 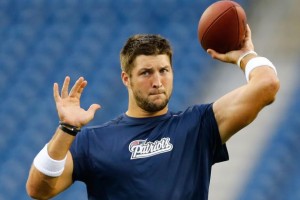 After one follower told Shelton that Tebow’s religious beliefs might have something to do with Tebow’s inability to get picked up by a team in the league, Shelton expressed his shock. “Is that seriously the reason?! That’s pretty sad …,” Shelton responded. “Glad they don’t hold country singers to that standard.”

Last year, Tebow was passed over for an open quarterback position on the Philadelphia Eagles. Still, he handled what many would view as an upset with grace. “Thanks @Eagles and Coach Kelly for giving me the opportunity to play the game I love! Romans 8:28 #Blessed,” Tebow tweeted in September 2015.

Former Eagles-turned-San Francisco 49ers coach Chip Kelly opened up about some of the improvements needed by Tebow that prevented him from being signed as the third string QB in Philadelphia. “Tim’s really progressed but we didn’t feel like he was good enough to be the three right now,” Kelly said when Tebow was cut from the Eagles last year, according to a CBS Sports. “He just needs to get out there and get more reps.”

Before he was cut from the team, Tebow said he was trying to improve but knew he didn’t control whether he made the Eagles team or not. “That’s not up to me. I just try to go out there and do what I’m coached and try to improve every day and compete. I’ve said this a lot of times to you guys and I really genuinely mean it: I’m not going to worry about what I can’t control. It’s a blessing being able to come out here and play the game I love,” Tebow said.

Tebow led the University of Florida Gators to a national championship as the team’s starting quarterback in 2008. He was also on the team when it won a championship in 2006 and was the first college sophomore to win a Heisman Trophy in 2007 which honors the best football player of a season.

Although he has struggled to find his place in the NFL after being drafted to the Denver Broncos in 2010, Tebow signed to the New York Jets in 2012, before getting picked up by the New England Patriots in 2013, followed by the Philadelphia Eagles in 2015.

The Christian athlete previously spoke about being defined by more than just football. “In the end, football is just a silly game. Greatness comes from serving,” Tebow told a crowd of students at a Liberty University convocation in 2013. “You want to be great? Be a servant. You want to be great? Humble yourself.”