Blood on the Altar

SPRINGFIELD – Thomas Horn’s exposé of growing persecution of Christians skyrocketed to No. 1 on several book seller lists (including Amazon.com) weeks before its release—where it remains a full month after it first hit retailer shelves. 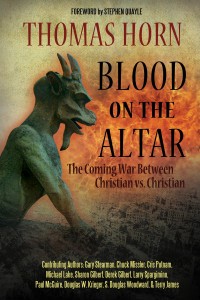 Blood On The Altar

Blood On The Altar: The Coming War Between Christian vs. Christian is the result of over a year of solid investigations into the growth of Christian persecution in the United States and abroad.

With the help of twelve well-known co-authors, the brand new title from Defender Publishing’s CEO cites recent reports starting with the Pew Research Center (PRC)—a prestigious think tank based in Washington, DC (which provides information on social issues and demographic trends shaping the world)—whose January 2014 report, “Religious Hostilities Reach Six-Year High,” chronicled the steady growth of religious persecution around the world. The PRC study found that social hostilities involving religion are currently most frequently directed against people of Christian faith. A report from the non-denominational group Open Doors confirmed the PRC findings, saying the number of Christians martyred around the world for their faith nearly doubled in 2013. It’s a frightening trend that shows no sign of halting.

Besides the Middle East, where persecution of Christians has been growing, the Pew findings also detail an escalation in the United States from the lowest category of government restrictions on Christian expressions as of mid-2009 to an advanced category in only three years, where it appears poised to continue upward at the time the investigative book Blood on the Altar headed to the printer. “If recent activity is any indication, it may not be long before ‘one nation under God’ joins those red-listed countries where Bible-based believers find themselves under the most severe discrimination,” writes Horn.

National Review Online supports Horn’s criticism of current US policy. In a recently posted review by Raymond Ibrahim, a Shillman fellow at the David Horowitz Freedom Center, the 2014 World Watch List (which ranks the fifty nations where Christians are most persecuted) is cited to determine that the US has become “the chief facilitator of the persecution of Christians around the world today.” While Ibrahim’s assertion mostly reflects American involvement in foreign conflicts, examples of repression in the US against people of Christian faith are growing, and examples are easily obtained online.

But Blood on the Altar goes beyond journalists and think tanks to expose the dangerous culture war that is dividing churches and pitting “Christian against Christian” over issues like gay marriage, ecumenism, and even Obama’s healthcare policies (where, despite a recent Supreme Court ruling [the “Hobby Lobby” case], polls show a whopping majority of Americans by a margin of two-to-one disagree with the Supreme Court and want federal mandates against Christians in such cases).

The surprising reaction to Blood on the Altar prompted the top-ranking radio show Hagmann & Hagmann to invite Horn on with veteran broadcaster Stephen Quayle to discuss (for a lengthy six hours) what some are calling “the best radio series of all time.” On that program (which remained the number one BlogTalkRadio News show in the world for several weeks) Horn broke new territory that ranged from social issues to science and technology. He discussed how these will play a role in what he called “a coming war on real Christianity,” generating commentary from blogs and news sites around the globe and sparking controversy.

Co-author Dr. Michael Lake, a Christian college president in Missouri, reported just last week that Blood on the Altar may also be stirring things up in churches. “I just got off the phone with a pastor in New York City,” Lake told Horn in an email. “I was in NYC to present the seminar I developed that included the book, Blood on the Altar. At the seminar, there were about 80 pastors and bishops representing 65 or so churches in NYC with attendance anywhere from several hundred to a thousand or more. […] This pastor informed me that he has been preaching from the syllabus and Blood on the Altar for the past week or so, and that many of the other pastors have been doing the same thing. Those churches have been moved to repentance for becoming lukewarm. Revival is beginning to start…even among the teenagers!”

This was great news to Horn. A goal of the book from the beginning has been that people might receive the work as a significant warning before it is too late and act upon the facts by diligently praying and offering up true repentance.

Billy Graham’s son is calling for the same thing. In an article on the Billy Graham Evangelistic Association’s website, Franklin Graham recently posted:  Hardly a day passes that I don’t hear someone say, “We are losing our country; we are losing our churches.”

While doomsday appears to be knocking at our door, let me take you back to the early 1800s. Many think of it as “the good old days,” but history tells us that society, even then, was as bad as it could get at that time. John Marshall, chief justice of the United States Supreme Court, wrote to President James Madison and said, “The church is too far gone ever to be redeemed.” When we examine why, we find that preachers had stopped preaching the whole Gospel of Jesus Christ, and the people were not hearing God’s Word.

What changed? Christians began to diligently pray for revival—and the result was the Second Great Awakening. When people’s prayers stormed the heavens, and when the Bible was opened in the pulpits and the Word of God proclaimed by passionate preachers, the church was awakened from slumber by the Holy Spirit, who moved in hearts, spreading revival throughout the heartland of America.

Another of the authors in Blood on the Altar is Dr. Chuck Missler—a well-known Christian apologist and founder of the Koinonia House ministry based in Coeur d’Alene, Idaho. He, too, believes there could be a light at the end of the tunnel regarding Christian persecution. As conservative believers find it increasingly difficult to attend liberal (and sometimes hostile) churches, he relates:

There is presently a groundswell across America—as in many other parts of the world—in which people are meeting in small groups in homes during the week, rediscovering the Bible, and enjoying a more intimate fellowship than they find in “Sunday church.” Many of these are encouraged and supported by their formal church associations; others simply meet independently. This is especially true of many young people, to whom “Sunday church” is a spectator sport, and who seek more personal participation and accountability.

After all, this is the way it all began: twelve guys along the seashore with their Teacher. All the remarkable episodes of the early church in the book of Acts occurred in homes. It wasn’t until the fourth century that edifices began to be erected, when Christians exchanged the rags of the caves for the silks of the court. And committed ambassadors were replaced with hirelings, inserted between an attendee and the Word itself.

In more than sixty years as a practicing Christian, the place that I’ve always seen people really grow spiritually is within small group Bible studies: where they can ask questions and hold each other accountable.

Do these hopes imply, as some believe, that the increase in persecution of true believers around the world today may presage an imminent, latter-day awakening…a revival in the purest sense of the word? Thomas Horn sure hopes so. But one thing he’s certain of: Growing animosity against Christians is a real and present danger that is only going to worsen in the days ahead.

“Between now and that climactic encounter when the supernatural battle spoken of in the Bible’s books of prophecy begins in earnest, we can expect the divide between religious and authentic Christianity to deepen,” he writes. “It is hard for us to imagine that, in places like the United States, true believers could someday be burned alive in churches, but it is happening in Nigeria now. It is hard for us to perceive that some might be beheaded, but this is a reality in Syria today. We can hardly fathom good people being crucified alive, but Pakistani Christians are living with this nightmare now. And in the United States, that city on a hill once listed among the safest locations on earth for Christians, a tide of anti-Christ sentiment has in only the last few years pushed this country into a category recently reserved for only those governments that restrict and criminalize expressions of real Christianity. How many more years will people be able to buy a book like this before it is banned?”