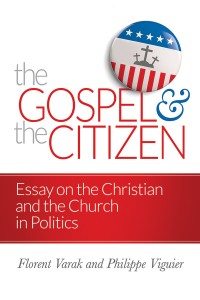 Should the church get involved in politics or influence their voting members? What does the Bible say about this issue? How should Christians project themselves in political discussions?

Florent Varak and Philippe Viguier, French evangelical pastors, wondered the same thing. A sermon series on 1 Peter 3 provided a natural discussion of how Christians should respond to the culture around them. It afforded a framework for navigating some of the confusion often generated by the variety of candidates for public office. The two also looked at the differing perspectives of church leaders who are trying to evaluate the political picture.

In the book, Varak and Viguier offer guidelines to assist Christians in determining how best to participate in the political arena as people who have a dual citizenship: in heaven and the country of their residence.

Now the English edition of this book, translated by Lori Varak and published by BMH Books (Winona Lake, Indiana) is available as “The Gospel and the Citizen, Essay on the Christian and the Church in Politics.”

Though first written for a French audience, the book has timely insights for Americans during a political season in which many are wary.

Priced at $10.99 retail, “The Gospel and the Citizen” is available at bmhbooks.com, amazon.com, and other online retailers, or may be ordered at any local bookstore.

Varak is the director of church equipping at Encompass World Partners. For more than 20 years, he pastored Les Eglises Evangéliques des Frères, the Grace Brethren church near Lyon, France. A graduate of Master’s Seminary, he also teaches at the Geneva Bible Institute. He and his wife Lori have three grown children.

Viguier is currently the pastor of the Les Eglises Evangéliques des Frères. Also a graduate of Master’s Seminary, he is the author of a thesis on the glory of God, published by Logos and recommended by John Piper. He and his wife Sophia have two young children, and he regularly blogs (in French and English) at philippeviguier.com.