BOSTON, MA (LifeSiteNews) – A 59-year-old Boston man is challenging the city’s refusal to fly a Christian flag over city hall to recognize Christianity’s historical contributions to both Boston and the state of Massachusetts, the Boston Globe reports.

Camp Constitution is a charitable trust dedicated to promoting “understanding of our Judeo-Christian moral heritage, our American heritage of courage and ingenuity, including the genius of our United States Constitution, and the application of free enterprise” through a variety of discussions, activities, and events. 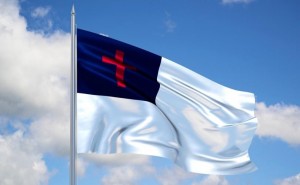 Last year its director, Harold Shurtleff, wanted to fly a Christian flag with a red cross on a blue background, with white on three sides, at the city hall to commemorate “the civic and social contributions of the Christian community to the City, the Commonwealth of Massachusetts, religious tolerance, the Rule of Law, and the US Constitution.”

But the city denied him a permit on the grounds that it “maintains a policy and practice of respectfully refraining from flying non-secular flags on City Hall flagpoles,” and said it would consider a request to fly a non-religious flag instead.

“This policy and practice is consistent with well-established First Amendment jurisprudence prohibiting a local government ‘respecting an establishment of religion,’” Boston property management commissioner Gregory Rooney told Shurtleff in an email. “This policy and practice is also consistent with City’s legal authority to choose how a limited government resource, like the City Hall flagpoles, is used.”

Shurtleff’s lawsuit argues that Boston’s policy is “invidious and hostile, towards religion,” and unconstitutionally treats religious and secular flags differently. The complaint also notes that Boston doesn’t apply such restrictions to its own government symbols, noting that the city’s official flag features the city seal, which bears a Latin inscription meaning “God be with us as he was with our fathers.”

Boston was founded by English Puritans, whose religious values led to the creation of both Harvard and Boston Latin School. The Massachusetts Constitution contains multiple references to God, including that it is the “right as well as the duty of all men in society, publicly, and at stated seasons to worship the Supreme Being, the great Creator and Preserver of the universe”; and that “the public worship of God and instructions in piety, religion and morality, promote the happiness and prosperity of a people and the security of a republican government.”

“The city’s censoring of Camp Constitution’s Christian Flag is the ultimate insult to the First Amendment and Boston’s rich heritage as a focal point of liberty and free speech at America’s founding,” said Liberty Counsel Assistant Vice President of Legal Affairs Roger Gannam, who is representing the group. “The city’s blatant discrimination against Camp Constitution’s Christian viewpoint is now a matter of record that the city can no longer deny. It should be clear to the court after today’s hearing that Boston’s unconstitutional censorship must be undone.”

City attorneys argue in court documents that it has “at all times complied” with the First Amendment, and has not violated “any constitutional, statutory, or common law rights, privileges, or immunities of the Plaintiffs.”

Boston officials have no qualms about raising flags that directly oppose religious principles, however. On June 1, the City of Boston’s official Twitter account posted a video advertising the fact that it raised a rainbow flag for LGBT “pride” on City Hall Plaza.

Liberty Counsel adds that the city has also flown a blue, pink, and white transgender flag, and even flags for the authoritarian regimes of China and Cuba.

Camp Constitution hopes to have a resolution in the case by September 17, so it can fly the flag for a Constitution Day event the group wants to hold at City Hall.