Emmanuel “Manny” Pacquiao grew up poor in the Philippines and went to work at an early age to support his mother after his parents separated. At 12 he began to fight, rising through the ranks to win 10 world titles. But the current WBO welterweight champion’s bold profession of faith in Jesus Christ is what sets him apart.

“God has a purpose,” he told Fox News. “He brought me back into his kingdom to use me to glorify his name, to let people know there is God who can raise the people from nothing to something.”

Surprisingly, he and noted quarterback Tim Tebow grew up in the same town on the island of Mindanao, in the southern Philippines.

Raised Roman Catholic, Manny strayed from the church as he rose to fame in his boxing career. “I went to church on Sunday, but from Monday through Saturday I was in the bar drinking,” he told CBN. “I was gambling. Careless words came out of my mouth. I committed adultery. I didn’t care.” 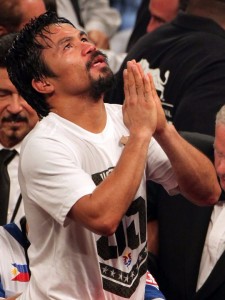 But one day he read a letter that gripped his heart. “I received a letter from my mother saying my sister stopped going to school because I stopped sending them the money. I cried, blaming myself for spending all the money on alcohol.”

That same night in 2011, not long after his third fight with Juan Manuel Marquez, God visited Manny in a powerful dream. “I heard the voice of God in my dream. His voice was ten times louder than thunder. He said to me, “My child, my child, why have you gone astray?” he recounted to CBN.

In the dream, which unfolded in a beautiful forest amid flowers, he also saw two angels, according to an interview with The Blaze. “When I heard the voice of God I felt like I died. … I was in the middle of the forest and I was kneeling and praying with my face on the ground and then I saw a light, a very white light and I heard the voice.”

He said the angels had “white, long, big wings” and said that God revealed to him “about the end of time.”

“I felt I was melting when I heard the voice of God. It was the turning point in my life. God spoke to me and he told me what He wanted me to do and I had to follow (Him).”

For a while, Manny tried to ignore the dream. But one day he felt compelled to pick up the Bible and begin reading it for himself. “I forgot about that dream, but when I started reading the Bible, the first verse I read said that God talked to a man through dreams. I realized, wow, my dream was real,” he told CBN.

As a result of the power of God’s Word, the working of the Holy Spirit in his heart and the compelling dream, Manny surrendered his life to Jesus Christ as his Lord and Savior.

“I’m happy because I found the right way, salvation, born again,” he told The Blaze. “We are required to be born again, all of us. Christ said unless we are born again we cannot enter the kingdom of God. So it’s very important to me. Jesus Christ said: ‘I am the way and the truth and the life. No one comes to the Father except through me.’ There is no other way. The only way is through Jesus.”

“When you accept Jesus Christ into your heart as your Lord and Savior, you have eternal life.”

Many changes unfolded in his life as he began to follow Jesus, according to Manny’s trainer, Freddie Roach. “Manny has made a lot of changes in his life. He’s more disciplined in his life. He sold his nightclub. He doesn’t drink anymore. He doesn’t chase girls anymore. Him and his wife are getting along a lot better now, him and his family. He’s become a much better person,” Roach told the Wall Street Journal. 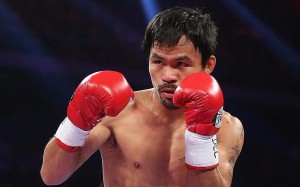 Manny stays in God’s Word with daily Bible study. “Keep this book of the law always on your lips. Meditate on it and be careful to do everything written in it. Then you will be prosperous and satisfied,” he told CBN. “When you keep the words of God in your mouth and your lips and your heart and your mind you will be guided by the Holy Spirit.’

Manny won a seat in the House of Representatives a few years ago, representing the province of Sarangani. He was re-elected in 2013 to the 16th Congress of the Philippines. Some believe he may be a candidate for president of the Philippines one day.

“The Lord has blessed me [with] everything I have … [my] political career and serving the Lord and being a boxer — and I believe God has a purpose,” he told The Blaze. “It is behind my expectation and imagination. I think it’s time to proclaim his name, not mine.”

“This is my life’s work, to spread the Word.”