The Boy Scouts of America doubled down recently on its quest to become the scouting organization of choice for boys and girls, announcing it will drop “Boy” from the name of its signature program.

Chief Scout Executive Mike Surbaugh also unveiled the group’s new “Scout Me In” marketing campaign aimed at promoting inclusiveness.  “As we enter a new era for our organization, it is important that all youth can see themselves in Scouting in every way possible,” Saurbaugh said.

The umbrella organization will retain its name, Boy Scouts of America or BSA. The term Cub Scouts, for kids 7-10 years old, is gender neutral and also will go unchanged. Boy Scouts, which includes kids from 10 to 17, will become Scouts BSA in February.

Cub Scouts will formally accept girls starting this summer. But Saurbaugh said more than 3,000 girls nationwide already enrolled in the BSA’s Early Adopter Program and are participating in Cub Scouts ahead of the full launch.

Allowing girls into the organization allows busy families to consolidate programs for their kids, BSA says. Most of the actual Cub packs and Scout troops, however, will be single gender.

“Cub Scouts is a lot of fun, and now it’s available to all kids,” said Stephen Medlicott, BSA marketing director. “That’s why we love ‘Scout Me In’ — because it speaks to girls and boys and tells them, ‘This is for you. We want you to join!’”

Boy Scouts of America claims almost 2.3 million members, down from 2.6 million five years ago. That includes Venturing and Sea Scouting programs, the latter allowing membership up to 21 years of age. In its peak years, Boy Scouts of America had more than 4 million participants.

Adults play a major role in the program: Almost 1 million adult volunteers serve as the backbone of the organization.

The program for the older boys and girls will largely be divided along gender lines but will cover similar activities. All participants can work toward the prestigious title of Eagle Scout. It’s too early to determine what impact the aggressive BSA effort to recruit girls will have on the Girl Scouts of the USA, an organization best known for its lucrative annual cookie sales. 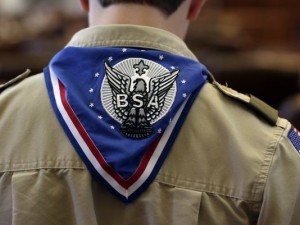 The organization, founded two years after Boy Scouts, currently claims a membership of about 1.8 million. And like BSA, it also has seen a membership decline. The Girl Scout organization responded to the latest news with a shrug. In a statement, the organization noted that the BSA announcement included no new, “girl specific” programming.

“Girl Scouts is the premier leadership development organization for girls,” Sylvia Acevedo, CEO of Girl Scouts of the USA, said in a statement. “We are, and will remain, the first choice for girls and parents”

The organization listed a series of efforts to “stay ahead of the pack of youth organizations.” That includes 23 new merit badges focusing on outdoors and STEM (science, technology, engineering and math).

Last month, the organization unveiled a LinkedIn network aimed at tapping a major resource — the group’s 50 million alums. The goal of the network is “to support female advancement in the workforce and help prepare girls for a lifetime of leadership and career success.”

Still, the impact of the BSA effort is being felt.  One regional leader, Fiona Cummings of Girl Scouts of Northern Illinois, told the Associated Press the BSA’s decision to admit girls is among the factors that have shrunk her council’s youth membership by more than 500 girls so far this year.

She said relations with the Boy Scouts in her region used to be collaborative and now are “very chilly.” “How do you manage these strategic tensions?” she asked. “We both need to increase our membership numbers.”

Caption: “Boy Scouts,” which includes kids from 10 to 17, will become “Scouts BSA” in February in an effort to become less gender specific, now that girls may join the Boy Scouts. Robert Deutsch, USA TODAY

The Scouts should have been prepared for this. One week after the century-old Boy Scouts of America announced it was changing its name and its mission to accept girls at all levels of scouting, its single biggest participant announced that it was cutting ties to the Scouts. And taking one-fifth of the Scouts membership with it.

The Church of Jesus Christ of Latter-day Saints, usually known as the Mormons, announced recently that it was severing its relationship with the Scouts effective Dec. 31, 2019, according to the Salt Lake Tribune.

In a statement issued jointly by the church and the Scouts, the church explained the move by noting that its membership was more global now than ever and required a global approach.

“In this century of shared experience, the church has grown from a U.S.-centered institution to a worldwide organization, with a majority of its membership living outside the United States,” the joint statement said.

“That trend is accelerating. The church has increasingly felt the need to create and implement a uniform youth leadership and development program that serves its members globally. In so doing it will be necessary for the church to discontinue its role as a chartered partner with BSA.”

As far as minimizing the Scouts’ embarrassment, that’s not a bad spin — no policy changes are cited. It’s explained as a natural part of the church’s evolution. But there’s no doubt that the Scouts’ increasing willingness to give in to liberal pressure on key points had a lot to do with the Mormons’ discontent. As noted by the Deseret News — a Salt Lake City newspaper owned by a subsidiary of a holding company owned by the church — the “signs of strain began to emerge years ago.”

It was five years ago that the Scouts voted to admit openly gay boys into the organization. The Mormon church said it had always allowed gays to join but the tension was building.

Three years ago, when the Scouts decided to admit gay Scoutmasters, the church said it would stay with the Scouts after the organization recognized “the right of all religious chartered organizations to select their Scout leaders in accordance with their religious beliefs,” the Deseret News reported.

In May of last year, the church decided to drop Scouting from church programs for boys aged 14-17, according to the Deseret News. That coincided with the Scouts’ decision to accept “transgender” boys — i.e. girls pretending to be boys — into the organization.

Now, six days after the Boy Scouts of America announced an epochal change in the group’s mission — complete with changing its name by 2019 to the bloodless, corporate Scouts BSA, the church has announced an end to all ties between the organizations. From the outside, it looked inevitable.

The Scouts have apparently decided the group’s future consists of a never-ending progression of appeasement to the forces of political correctness, a cycle that’s ultimately hollowing out an organization that used to be revered for its influence on American youths.

The Mormon Church can see where that’s going — just like any sensible person can. Its decision to end the 105-year partnership between the organizations means 425,000 boys will leave an organization of 2.3 million within the next two years.

That’s almost one out of every five, and it’s going to hurt badly. But it only came after a series of decisions made by the Scouts themselves.

One Scout leader in Utah told the Deseret News that the news of the announcement didn’t come out of the blue, but it wasn’t expected now.

“It’ll be a blow,” said Mark Griffin, president of the BSA’s Great Salt Lake Council. “We can’t say that it was a total surprise. Maybe the timing is a surprise, but we knew the church was working on a program for a worldwide church but that any changes would be based on the need to do the same program in Paris, France, as they have in Paris, Texas.”

And a program that won’t be vulnerable to regular attacks from the American left. They should have been prepared.

BELTON, S.C. — The leader of a boys-only outdoor adventure program has warned of the consequences of what he says is the latest strike in the “war on boyhood.”

Trail Life USA CEO Mark Hancock spoke out after reports of how the Boy Scouts of America (BSA) has welcomed hundreds of girls to local groups since doing away with its boys-only policy last fall.

Hancock said the way the BSA move is playing out has confirmed fears that boys would be further marginalized. He referenced how in one media report, a BSA den leader said that the new girls had been calmer and easier to manage, while the boys were more easily distracted.

“Can you imagine what’s going to happen in that co-ed environment, where girls raise their hands to answer questions while boys squirm and poke each other?” Hancock commented. “In no time at all, the adults will be saying, ‘Why can’t you behave like Susie?’ That previously all-boy environment will favor the compliance of girls and, once again, boys will be told they can’t quite cut it.”

“Confined to classroom settings more suited to girls and denied rough-and-tumble experiences that help them learn and grow, it is no wonder boys are struggling,” Hancock said. “They are losing out and not developing as strong, capable men because we are not letting them be fully-boys.

Since it was founded in 2014, Trail Life USA has been embraced enthusiastically by families seeking a faith-based, nurture-and-activity program based on traditional values. Today there are almost 30,000 members in over 750 troops across 48 states. The organization has seen significant growth since the BSA’s decision to welcome girls.

“Boys love boy-focused, outside challenge in hierarchically structured environments,” said Hancock. “They thrive there. They need clear boundaries and designated leadership.  If it’s unclear, they will create this structure in a way that looks like rebellion or resistance or apathy.”

Typically chartered by local churches, Trail Life USA troops offer a K-12 program centered on outdoor experiences that build young men’s skills and help them grow on a personal level and as role models and leaders for their peers.

“It’s good to know that these new organizations are growing like wildfire,” said Tim Wildmon. “We say, may their tribe increase.”

Trail Life USA (www.traillifeusa.com) is a Christian outdoor adventure, character and leadership program for boys and young men, K-12. Chartered through churches in 48 states, the program centers on outdoor experiences and biblical values that build a young man’s skills and allow him to grow on a personal level and as a role model and leader for his peers.