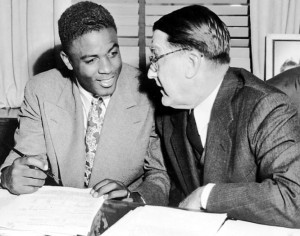 (Fellowship of Christian Athletes – FCA)  In Major League ballparks across the United States, players wore No. 42 on April 15th in honor of Jackie Robinson, who on that date in 1947 broke baseball’s color line by becoming the first African-American to play in a Major League Baseball game in the modern era.

Did you know that Branch Rickey, the man who signed Robinson to a contract with the Brooklyn Dodgers, was possibly the most influential person in the founding of the Fellowship of Christian Athletes?

Rickey displayed his pioneering ways by establishing the affiliated minor league baseball system as we know it today and by breaking away from the rest of baseball’s owners and signing Robinson. Rickey was also a devout Christian man and a key player in helping the Fellowship of Christian Athletes get off the ground.

In 1954, seven years after Robinson made his big league debut with the Dodgers, FCA founder Don McClanen began a letter-writing campaign to professional athletes and administrators that he had read about in articles highlighting their faith. McClanen had a desire to form an organization of athletes and coaches that would project them as Christian men before the youth and athletes of the United States.

Rickey, by that time a Pittsburgh Pirates executive, was one of the few who did not respond to McClanen’s correspondence. When McClanen, who was a coach in Oklahoma, and his family traveled East that August, he tried repeatedly to set up a meeting with Rickey.

As the story goes, published in a book by FCA in 2004, Sharing The Victory: 50 Years, One Mission:

McClanen knew that Rickey was a key, so he tried repeatedly to set up an interview. Rickey’s secretary gave him no hope, but finally told McClanen that if he wanted to drive all the way to Pittsburgh with the possibility of a five-minute meeting, he wouldn’t stop him. While (McClanen’s wife) Gloria and their two children bathed the appointment in prayer, McClanen went to the Pirates offices and waited for an opportunity to share his idea with Rickey. So, McClanen sat in the waiting room, hoping for his five minutes with Rickey. The five-minute meeting lasted five hours.

“We struck up an immediate rapport,” McClanen remembers. “I presented him with my entire story and dream of bringing ballplayers together to influence young people for Christ. Our talk was interspersed with calls about trades and such, and I enjoyed listening to that. “Finally, he made a statement that I will never forget: ‘This thing has the potential of changing the youth scene of America within a decade. It is pregnant with potential. It is just ingenious. It’s a new thing, where has it been?’”

What followed was nearly as important as his verbal support. Rickey recognized that the movement would need funding. He came up with the figure of $10,000 and told McClanen how to get ahold of Paul Benedum, an influential businessman in Pittsburgh who eventually did give the $10,000.

That became the turning point in taking what McClanen has referred to as “God’s amazing, miraculous dream” and helping it become a Christian sports ministry with over 450 offices and more than 1,100 staff members across the nation, one that God uses to bring thousands of people into His Kingdom every year. In addition, FCA is moving beyond American borders, with camps held in 25 countries last summer alone. 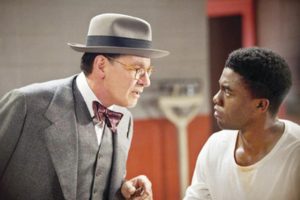 For his part, Rickey would be inducted into FCA’s Hall of Champions in 1995. Rickey’s story is well known in baseball circles, and Harrison Ford’s version of Rickey in “42″ was able to shine a light on Rickey’s life to those outside of the game. McClanen’s story, while every bit as remarkable as Rickey’s is not as popular. Joe Murchison’s biography on McClanen, Caution to the Wind, is available from Cross Training Publishing.