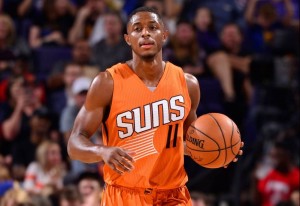 Brandon Knight hasn’t played a single minute in the NBA this season. The Phoenix Suns guard tore the ACL in his left knee playing basketball in Miami this past July.

The time away from the game has led Knight to find comfort in his favorite Bible verse, Romans 8:28: “And we know that in all things God works for the good of those who love Him, who have been called according to His purpose.”

“I have learned this year in every negative there is a positive if you stay committed,” Knight says. “Keep the faith. If we walk the walk, you will be taken care of.”

His faith has remained a presence in the Suns’ locker room, even while he’s rehabbing, and even while the team sits in last place in the Western Conference.

“I know that he is a man of God,” teammate Devin Booker said. “He always has his Bible on him. With him being injured he has been a great personality around the locker room. We all know that he can play basketball very well, but due to the unfortunate events of his injury, it has held him off the court. He has been in good spirits around us every day. It doesn’t go unnoticed.”

“I see him putting his faith in God,” teammate Jared Dudley said. “Tough times don’t last but tough people do. We have to put our faith in God to get us through tough times. He has a good spirit about him. I am excited to see him in the weight room and a lot of that excitement and hunger comes through his faith.”

“Brandon is a tremendously talented individual. He is an all-around great guy who brings an element of good character to our team. He is very well respected and very well liked here. He is very active in his faith. He is definitely not shy to talk about it or bring it up any time. It is definitely good to have a guy like that in the locker room,” teammate Alan Williams said.

Knight entered the 2011 NBA Draft after one season at Kentucky, and was selected by the Detroit Pistons with the eighth overall pick. He was named to the NBA All-Rookie first team in 2012, but then traded to Milwaukee in 2013 and to the Suns in February 2015.

While being drafted was his “biggest moment,” basketball is not Knight’s biggest priority. It’s Jesus.

“He is Number One. Without Him we would not be here. His grace, His mercy is everlasting. He knows we are not perfect but He was loving enough to love us when we didn’t know Him and give us an opportunity. I have been able to say that I know God is real. Everything He has done for me, I will forever be committed to trying to walk that walk,” Knight says.

Knight grew up going to New Ark Covenant Church in Hialeah, Fla. His parents, Efren and Turgenia Knight, are his role models. Both are active in church ministry and raised him with the belief that faith is the “No. 1 thing in our lives.”

“I grew up in the church. I gave my life to the Lord when I was young. Personally you have to grow up and understand what that means,” Brandon said. “Growing up with them and leading our household, especially my dad who is very much into ministry, that is what helped me grow and believe.”

Yet even at 26 years old, Knight still sets growing closer to God and continuing to improve that relationship as a goal.

“I am not perfect but I strive to improve every day. When you are a Christian, you would hope [people] could see it through your walk. We make mistakes. We are human. I tell a lot of people when you are a Christian you are not saying, ‘Look, I am better than you.’ You are saying, ‘I need help.’ Christians need help, it’s why we give our lives to the Lord so that we can have help to be better. We are not strong enough to do it on our own. We are not strong enough to have the will power to do what we need to do. We need help and we are able to admit it — that is why we are Christians.”

“As a Christian, it doesn’t make life easier. There is going to be more turbulence once you become a Christian because you are going to get attacked from all sides. There is a positive aspect to it. Everything happens for a reason. Embrace those attacks because God says what has been formed against you won’t prosper.”

“I take heed to God’s promises and know that whatever He says in His Word will come true. A lot of people in the Bible were put in very tough situations so they could learn about preparing them for something that if they didn’t go through they wouldn’t be where they were. Jacob, Joseph went through things. Every journey they went on prepared them for what God wanted them to be in the end. A lot of people look at failure or setbacks as a negative thing. I think the biggest takeaway from the Bible is that if something negative is happening in your life, if you put God first, it is going to be a positive.”

“God is preparing you for something He wants you to do in the future. He is trying to put you in a place that He has prepared.”