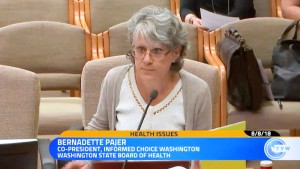 (NaturalHealth365) Bernadette Pajer of Informed Choice Washington gave an impassioned speech to the WA Board of Health regarding a terrifying vaccine industry initiative: a large and highly organized network involving public health groups and big pharma wish to force vaccines on every adult and an immunization schedule on every child.

The vaccine industry is working hard (behind closed doors) to vaccinate as many people as possible. Sadly, the right to refuse vaccinations is viewed as an ‘obstacle’ by the pharmaceutical industry and conventional medicine.

But, Bernadette Pajer reveals the true nature of big pharma and vaccine policy makers – which will shock most uninformed people.

Bernadette Pajer called out immunization program head Michelle Roberts and the heads of every state in the U.S. on their involvement in this ghastly initiative, which she called “a mission to remove our human right to medical choice” and silence the truth about vaccine side effects and limitations.

The immunization program heads are pushing this agenda with the full collaboration and support of big drug companies like Merck, Pfizer, Glaxo Smith Kline and many others.

Pajer shared that Informed Choice Washington has been trying to get the word out about vaccine side effects as well as immune system problems to the public health agencies of Washington state. The goal of the group is to foster discussion and better conditions for consumers of all ages.

Instead of openness and cooperation, she was astonished to find a tightly organized, unreceptive network with literally thousands of components working toward one goal: to increase vaccination uptake at any cost.

She notes that since 1999, the Association for Immunization Managers (AIM) has been working closely with the pharmaceutical industry toward this goal. She laments that the efforts of her group and others like it to work with these agencies on education and improvement are either met with disdain or completely ignored.

Instead, programs are in place and conferences held to further the agenda of getting the highest numbers of vaccine acceptance possible. There are even seminars given to medical professionals on how to handle “vaccine hesitancy” and “compel” patients (and parents) to accept vaccines – even if their misgivings are valid.

She is alarmed at the coordinated effort of these groups – and you should be, too. The list of vaccine side effects is long and well-documented. They include autism, cognitive problems, compromised immunity, chronic headaches plus many other issues.

Vaccine adjuvants like aluminum, chromium and mercury are known neurotoxins that are doing underreported damage to the brain – especially in young and developing children. Also, despite widespread vaccine use, incidents of many diseases are actually higher. Cancer rates and infectious diseases are still a major concern – despite the widespread use of vaccines.

With so many vaccine dangers, it is beyond alarming that there is a highly organized network in place with the agenda of pushing vaccines – without adequate testing or safety data.

Bernadette Pajer should be applauded for speaking out, and hopefully her example will inspire many others to do the same.