Bridging the Spiritual Gap in Cycling

“My entire life was cycling,” says Todd Henriksen. “I lived, breathed, didn’t care about anything else to a detriment at times.”

Todd raced for 13 years, 2 of those at a national team level. “I’ve only met one other Christian in the cycling world,” he says. “A mountain biker who heard me listening to David Crowder music in my room during a race.” 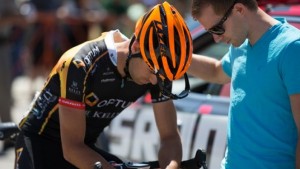 Cycling is one of the world’s largest sports and a dark, non-spiritual place, according to Todd.

“I was trying to find a Christian who was racing and also encourage my non-believing friends,” Todd remembers. But he was also working 70-hours a week and it was becoming clear to Todd that God wanted him to be in ministry.

One day before a race, Todd gathered 5 guys at a Starbucks for Bible study. “They all thought they were the only Christians in cycling,” Todd remembers. They all knew each other but were all on separate teams and all lived in separate places. But most importantly, they were brothers in Christ. “These were some of the best US guys in the next generation of cycling,” Todd says. “This was an eye opener for me.”

The next day 21-year-old Ben King (one of youngest in the race) won the national championship race. “And then he started sharing his faith,” Todd exclaims. “Lance Armstrong won [the championship] at 25 years old. Ben won it at 21. He signed a contract by one of the largest teams in pro cycling. My mind was blown.”

That’s when Todd left his company. “I was done,” he says. “I wanted to do ministry with cyclists full time.” So, after some connection with Athletes in Action staff members, Todd pitched the idea to start a ministry for cyclists. 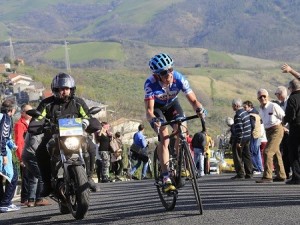 He wanted to launch the ministry and believed in doing it under a banner. “I need accountability and help,” he says. “There was a huge gap in the sporting world and AIA wants to reach every athlete in every sport, so what I wanted to do was bridge that gap for cycling. I applaud AIA for not saying no to this young kid who was very ambitious.”

Todd immediately began strategizing with other AIA staff members about how to reach guys at the elite and pro level.

“I work with guys who live all over the world, mainly Europe and the States,” Todd says. “They travel 10 months out of the year, are always on the road and in hotel rooms. I can’t just fly to Italy and meet with Ben King. So we use technology to stay in touch.”

This is the first time for an elite level cycling group to meet like this.

And while most of the guys are Christians, there are some attending who are mainly intrigued or just want to be encouraged. The cyclists are also building friendships with guys who were merely competitors just a few months prior.

“Now, when they go to races around the world, they have someone to talk with, share life with,” Todd explains.