Brussels pastor: ‘Our city is in pain’

(WNS)–“A raid is underway right now in our neighborhood. The helicopter you see on CNN is flying over our house,” Carlton Deal told friends in an email March 22, hours after militants tied to Islamic State (ISIS) bombed sites in Brussels, killing at least 34 people and wounding more than 230 others.

Schaerbeek, the Brussels suburb where Deal, an American pastor, has lived for the past 12 years, was the site of ongoing searches as evening fell. A massive police operation continued under lights near a neighborhood train station, and law enforcement officials reportedly were on the lookout for one suspect who remains at large. 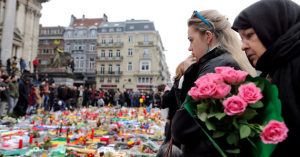 Immediately following the attacks, which began at the height of the Tuesday morning commute, Brussels—a compact city that’s not only the capital of Belgium but the seat of the European Union and NATO headquarters—went on virtual lockdown. Public transportation came to a stop and flights were diverted or canceled after terrorists struck at the main airport at Zaventum, 6 miles northeast of the city center. Flights were not scheduled to resume until at least noon Wednesday. A second attack at the Maelbeek subway station, just blocks from EU headquarters, shut down the city’s transportation system. Reminded of last November’s attacks in Paris, where ISIS fighters hit three different sites, Belgian authorities braced for more.

Hours later, police found a nail bomb, chemicals, and a black ISIS flag during house searches in Schaerbeek, according to a brief statement from the federal prosecutor’s office. Two months ago, authorities found explosive belts in a Schaerbeek apartment and traces of the same explosives used in the Paris attacks.

“Our city is in pain today,” said Deal, founding pastor of The Well, a church that meets in four ethnic neighborhoods in Brussels, including near his home in Schaerbeek. Deal also directs Serve the City, an evangelical ministry that began years ago as an outreach of the church and now operates independently, serving homeless and, increasingly, refugees from the Middle East and Africa.

The Well’s church offices are less than a kilometer, Deal said, from the Maelbeek subway station, which was hit by a 9 a.m. explosion about an hour after two blasts rocked the airport. All morning, stories of “near misses” poured in from the people his ministry serves—a last-minute flight cancellation that kept travelers from the airport; an impromptu decision to walk instead of taking the subway; and reports of friends and neighbors who felt the explosions but were unhurt.

“All day long sirens are sounding, police and ambulance vehicles rushing to respond to needs, helicopters hovering overhead,” Deal said. At the same time, he said he was overwhelmed by an outpouring of concern for the ministry and for the city.

Tuesday night is normally when Serve the City holds activities, but Deal said the group had to cancel “for the safety of our volunteers.” With nightfall, helicopters hovered over an eerily quiet city, as Prime Minister Charles Michel urged residents to stay indoors and many streets, especially near the blast sites, remained closed.

“On a day like this, we see more clearly the brokenness around us. We grieve all that is lost, but not as people who have no hope,” Deal told supporters in an email. Serve the City has doubled and tripled its capacity to provide meals and other services since refugees from the Middle East and Africa began arriving in larger numbers last year, Deal told me. At that time, authorities traced the November Paris attacks, which killed 130 people, to an ISIS network in Brussels’ Molenbeek neighborhood, where Deal and others also host Christian outreaches. On March 18, Belgian authorities captured Salah Abdeslam, wanted as a leader in those attacks, only five blocks from his childhood home in Molenbeek.

Deal said he hopes “the events of today deepen our compassion and strengthen our resolve to cross the line” and continue serving other ethnicities and Muslims in the city.

Belgian-Iranian pastor Said Najafabady, who pastors a congregation that includes Muslim converts from Molenbeek, said he took the subway to his office Tuesday morning “very close to the Maelbeek metro station, but thank God my train was delayed a bit.” The explosion took place about 5 minutes before he would have arrived there, then all trains were shut down.

“As far as I know, all our brothers and sisters in the congregation are safe, too,” Nafajabady told me.

Others with Christian ministries also were affected. Joe Szabo, senior pastor of the Christian Center in Brussels, told the U.K.- based Christian Today members of his congregation were in the airport when the explosion happened. “Thankfully no one was hurt,” Szabo said.

The pastor told the publication his church suspended its outreach program to refugees due to the shutdown of public transportation but managed to distribute food to those living near its building. Volunteers will resume work with refugees as soon as they can, he said.

“We are still believing that we are to love all people in our city,” he said. “We pray for Muslims, for Christians, and for the Jewish population. The bombing will not deter us from continuing to carry out our mission to share the love of God with all people.”

ADF International, the religious liberty legal advocacy organization, opened offices a year ago in Brussels, three blocks from the Maelbeek subway station, where its attorneys were actively involved in drafting resolutions in support of an EU genocide declaration against ISIS. None of its staff members were hurt in the blasts, reported ADF chief counsel and executive vice president Benjamin Bull.

“We don’t expect changes to our work in Europe except that the Brussels team will probably work from home until the high alert has passed,” he said.

The Tuesday attacks overshadowed political news in the United States, with that night’s primary in Arizona and caucuses in Utah and Idaho. But terrorism and national security are likely to dominate the campaigns—and candidates displayed their divergent views shortly after the Brussels attacks.

Sen. Ted Cruz, R-Texas, called on law enforcement to step up policing of “Muslim neighborhoods” in the United States “before they become radicalized.” Meanwhile, Ohio Gov. John Kasich cautioned against clamping down on Muslims generally, but called on President Barack Obama to return to the United States immediately from his state visit to Cuba to assemble a global coalition of European and Arab allies to “destroy ISIS.”

Leading Democratic contender Hillary Clinton said she would “intensify and broaden our strategy” against ISIS, saying NATO was indispensable. Trump has suggested he as president would do away with NATO.

Najafabady said all the ethnic Iranian (or Farsi-speaking) churches in Belgium will hold a joint service for Easter on Sunday, and he expects other churches to unite as well in a sign of solidarity and perseverance.

“We’ll definitely pray for the victims and their families and ask God for comfort and peace,” he said.