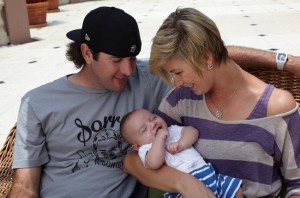 SOUTHERN CALIFORNIA (ANS) — He grew up wearing knickers sewn by his grandma, endured the rage of his Vietnam vet father, and learned to play golf smacking a wiffle ball around the house.

Bubba Watson, 37, arguably golf’s most colorful character, won the Los Angeles Riviera tournament Feb. 21, and he credited Jesus and the Bible with the win, his ninth PGA tour victory since 2010.

“I have a lot of fears in my life, which, as I’m reading the Bible, I’m not supposed to have — but I do,” Watson told the New York Times. “Me changing as a person has helped my golf, not my swing.”

It wasn’t too long ago that Watson would lose games in his brain. He struggled with insecurity, melted down after a bad shot, and looked for people to blame when things went wrong. He used curse words and rankled other players with some unfriendliness.

But with the help of his wife, his caddie, and fellow Christian golfers (who meet weekly at a PGA Bible study), Watson is overcoming the temperamental side of his personality.

“We’ve been working on it, a hard, slow process,” Watson said in Golf Digest. “Instead of swing thoughts and swing, it’s all about the mind for me. It’s staying patient, and having Teddy (the caddie) in my ear. Teddy’s been a blessing. It’s been a struggle over five years, but we’re working in the right direction.”

His twitter account is telling. Followed by 1.54 million, @bubbawatson describes him in this order: “Christian, husband, daddy, pro golfer.”

Watson told BillyGraham.org that he is “getting more in the Word and realizing that golf is just an avenue for Jesus to use me to reach as many people as I can.”