Religious colleges face a new threat over their sexual policies

(WNS)–Christian colleges value accreditation from secular agencies as a quality assurance mechanism, but also because without it their students will lose federal financial aid and may have trouble gaining acceptance to graduate school. So accreditation is a potential weapon in the hands of agencies influenced by the agenda of gay rights activists. This worries some education leaders in the wake of news from Gordon College in Wenham, Mass., while others say there’s nothing to fear.

The Gordon story, in brief: Gordon President Michael Lindsay bravely joined some other Christian leaders in signing a letter to President Barack Obama asking for religious exemptions to a proposed ban on federal funding for institutions that “discriminate” against LGBT employees. In September the Commission of the New England Association of Schools and Colleges (NEASC), one of six regional accrediting agencies, asked Gordon for a report about whether its conduct policy forbidding “homosexual practice” meets NEASC’s requirement for “nondiscriminatory policies and practices in recruitment, admissions, employment, evaluation, disciplinary action, and advancement.”

NEASC President Barbara Brittingham told me, “We didn’t have any problem with any other part of the school’s policies,” which also include prohibitions of sex outside marriage, drunkenness, blasphemy, profanity, theft, and dishonesty. She also said, “We accredit Boston College, which is a Jesuit school, and they only want Jesuits to teach theology. We have no problem with that.” 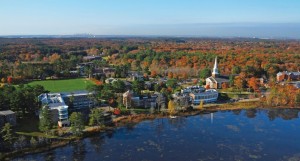 When asked why Gordon should have to produce a special report regarding its opposition to homosexuality, Brittingham said, “How society thinks about LGBT people has changed drastically in the last 15 years or so, and Gordon seems to be saying that one group of people can do certain things, but another group of people cannot.” She also said NEASC has a good relationship with Gordon and that withdrawal of accreditation could not happen next September, when the report is due. She said the worst possibilities at that time would be some form of probation or a more formal inquiry. Later, she emailed me about the probation issue and said, “I was speaking hypothetically in the general sense, not about Gordon College.”

David Brown, a professor at Northland International University, says, “Leaders in Christian higher education are keeping a close watch on what is happening at Gordon. … They were anticipating this as a falling of the first domino, and they aren’t surprised it happened in Massachusetts.” Brown noted that NEASC “pinpointed one action of one leader on a topic on which good people differ, and threatened the entire future of a fine school.”

But a statement from the Council for Christian Colleges and Universities said, “NEASC has been clear in its communication that Gordon’s accreditation is not at risk. The Higher Education Opportunity Act requires accreditors to respect institutional mission, and in the case of religious institutions, their religious mission specifically.” Mary Ellen Petrisko, president of the Accrediting Commission for the Western Association of Schools and Colleges, told me, “I do not believe that the Gordon College situation is the beginning of a trend that will endanger the accreditation of religious schools.”

Withdrawal of accreditation is very rare and has been done only once by NEASC since 1988—in 2010, when a school had serious financial problems. But this is also the first time that an accrediting agency has demanded a report in relation to rules concerning homosexuality. So questions remain: Will Christian colleges be evaluated based on consistency with their own mission and values, or will they be judged by someone else’s? And if accrediting agencies demand changes, will those colleges give in?