The new water restrictions “changes behavior from the Oregon border all the way to the Mexican border. It affects lawns. It affects people — how long they stay in the shower. How businesses use water.” – California Governor Jerry Brown

(Los Angeles, CA) – The drought in California is bad. So bad, it’s now led to historical mandatory water restrictions throughout the state. In essence, by executive order Governor Jerry Brown has placed a 25 percent restriction on statewide water use compared with 2013. And Californians, especially farmers, thought 2013 was a tough year. 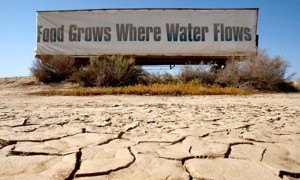 On ABC’s “This Week,” Governor Brown said, “This executive order is done under emergency power. It has the force of law. Very unusual, it’s requiring action and changes in behavior from the Oregon border all the way to the Mexican border. It affects lawns. It affects people — how long they stay in the shower. How businesses use water.”

“If they don’t comply,” he added, “people can be fined $500 a day. Districts can go to court to get a cease and desist order. The enforcement mechanism is powerful. In a drought of this magnitude, you have to change that behavior and you have to change it substantially.”

The new restrictions are pushing some people over the edge. Explained Bill Whalen of Stanford University’s Hoover Institution, “Without water, you can’t live in California. It ties into the California psyche. They have plush lawns and nice gardens that require lots of water. They have the ocean and Lake Tahoe skiing. You have a nice car. You want it clean. You need water. You can’t have California agriculture without water. You lose the nation’s salad bowl.”