In an announcement on its website, Campbell’s CEO Denise Morrison threw down the gauntlet, declaring a new era of food transparency for the company, affirming the inescapable conclusion that consumers want to know what they’re eating. Clean food activism has also rallied millions of people to boycott deceptive food brands that oppose GMO labeling, causing a loss of consumer trust in the “traitor brands” like Kashi, Larabar, Silk, General Mills, Kellogg’s, PepsiCo and Coca-Cola.

“Today, consistent with our Purpose, we announced our support for mandatory national labeling of products that may contain genetically modified organisms (GMO) and proposed that the federal government provide a national standard for non-GMO claims made on food packaging,” says Campbell’s. “We have always believed that consumers have the right to know what’s in their food. GMO has evolved to be a top consumer food issue reaching a critical mass of 92% of consumers in favor of putting it on the label.” 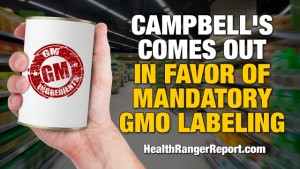 In saying this, Campbell’s is rejecting the “obfuscate and deceive” strategy of the rest of the industry: LIE, hide, threaten, deceive, distract and corrupt at every opportunity, keeping consumers in the dark and pushing poison (GMOs and glyphosate) while claiming food buyers are too stupid to understand simple food labels.

For this decision, Campbell’s deserves real credit. This is a groundbreaking decision that puts Campbell’s in a leadership position on the issue of food transparency.

If I were a Campbell’s shareholder, I’d be praising this decision. It puts Campbell’s far ahead of the coming wave of citizen science where privately run labs like my own (Labs.NaturalNews.com) are testing and publishing food test results acquired from state-of-the-art equipment capable of detecting herbicides and heavy metals at parts per billion concentrations.
Furthermore, this announcement engenders consumer trust in Campbell’s as a brand. While other companies are trying to deceive and lie to consumers, Campbell’s is pursuing a recipe of food transparency, disclosing exactly what it’s putting into its soups and other food products.

While I don’t endorse the entire Campbell’s product line — not yet anyway — I have to applaud the company’s actions on rejecting GMO deceptions and announcing a vision for long-term food transparency that covers GMOs and artificial additives as well.