She loved watching the television shows of the 1970’s and 1980s, programs like “Get Smart” and “Dallas.” At 17, she announced to her family that she was going to become a screenwriter. But as a teenager growing up and as an adult living in Winnipeg, Manitoba, the burden of geography took hold — Hollywood was more than 2,000 miles from her Canadian homeland.

But in her 30s, that little thing called the internet changed her life, allowing her access to UCLA screenwriting classes.

Now Ms. Hutchinson, 52, has written more than 20 Christian-based screenplays, and one has already hit the big screen in Phoenix’s West Valley — “Lucky’s Treasure,” starring Michael Ironside, about a young Christian woman who goes back to her grandfather’s farm to help him get over the death of his wife. The reunion leads to a relationship with a horse and a treasure hunt — a journey that makes her faith stronger and brings her closer to God.

However, getting the assignment to write the film was an 8-year journey that involved David A.R. White, owner of Pureflix, who distributed the movie. 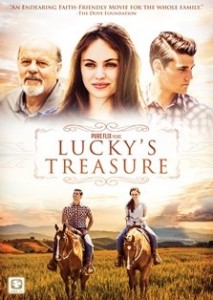 After obtaining a Master’s degree in English in 1994 and two UCLA screenwriting certificates in 2005, Claire wrote scripts professionally and pitched her scripts to Hollywood studios and smaller production companies with her agent, Terry Porter. Terry was the first Christian agent in Hollywood, who has been in the business for over 26 years.

“For years, I was writing and writing and my agent Terry Porter was trying to sell my scripts, and we got into so many high level companies, even Dreamworks, but we never could get the sale. So, I kept writing. Then we got involved in a group called ICVM, International Christian Visual Media, which involves filmmakers who are doing Christian and family-friendly films. They meet once a year. They have a networking guide and all their names are listed in the guide, so I took that home from the conference. At the time I was having a screenwriting competition and I needed judges, and David White, founding partner in the film production company, Pureflix, was listed in the directory.” Claire asked David to be a judge of her contest, and she and Terry Porter met him in L.A. in 2007. “Very nice man, cordial. We had a great time at the meeting and it was nice to meet someone who also saw the vision for Christian films in the marketplace.”

Ten years later, David A.R. White would become the distributor of the film “Lucky’s Treasure”, becoming the conduit between Claire and the producer of the film, Shane Hawks. Claire explained, “After I got home from the meeting with David White, I submitted to him an outline called “Cowgirl.” He liked it but nothing ever came of it. Then eight years later, in 2015, David heard from a friend, producer and director Shane Hawks out of Oregon. Shane asked David if he knew anybody who would be good to write a girl and horse script. So David remembered my “Cowgirl” outline from eight years earlier. He told Shane about me, and Shane called me, and that’s how I got the contract for “Lucky’s Treasure.” The movie script wasn’t based on my “Cowgirl” outline but it was based on a 12-page outline Shane had put together.” 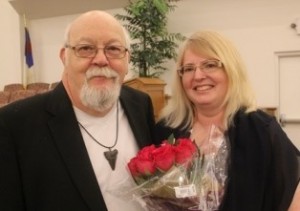 Claire described “Lucky’s Treasure” as the story of a college-aged young lady who encounters danger, love, and a search for a treasure that all test her faith and perseverance.

The film played to a packed house at its Sun City West premiere on April 22. One attendee commented that it “reached a wide audience. There’s something for the elderly, the middle aged, the young people and there’s even suspense and a search for a treasure.” Michael Ironside gave what all said was a stellar performance as Henry Landis, the crusty grandfather who loses his wife to a horse accident. A widow in the audience commented that Ironside’s performance really “touched my heart. You dealt with the subject of the loss of a loved one, and Michael played the aftereffects of loss with realism and heart.”

Claire described her journey to finally getting the assignment to write the film as a “crazy round-a-bout way to get there,” but advised that in this business of screenwriting, “you have to keep on writing and keep on persevering because you never know when your break is going to come and you don’t know how.” She stated that she persevered because she always had her eyes set on the goal:

“Christians in the film industry have to remember why they are in it. A lot of the reason I got into screenwriting professionally was to communicate the Gospel and Christian values to my audience so they can be uplifted and changed and know the love of Christ. In some scripts it’s more obvious than in others, but it is there. It is a through-line, the Christian worldview.”

Finally, with the release of films like “War Room”, “The Case for Christ”, “Do You Believe” and “Lucky’s Treasure”, Claire sees the labors of Christians in the film industry paying off in a big way. “Christian producers are making really well-made films today, as good as any Hollywood film. They are getting the kind of cast, crew, writers and directors that are making movies the mainstream is starting to pay more attention to, and get an audience. It’s happening now. It’s coming together. And I’m so glad to be a part of it.” 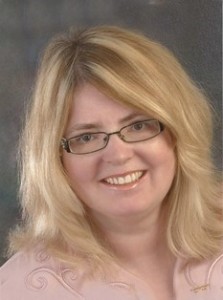 Claire Hutchinson is a produced and award-winning screenwriter, script analyst, film festival judge, and speaker. Her screenplay, “The Doctor,” won the Grand Prize at Life Fest and the Winnipeg Real to Reel Film Festivals. She has consulted for companies such as Living Water Media, Visual Productions, Worthington Media, CV Films, and Abel Company. Her credits include “Lucky’s Treasure” (2017) and “Waves” (2015), both listed on IMDB. She is a writer and co-producer on the upcoming short film, “Living the Dream,” now in production. “Lucky’s Treasure” is distributed through DVD at Redbox, stores and the Pure Flix Streaming Channel.

To have Claire and Terry speak at your church and screen the movie, please email claire@clairehutchinson.net .