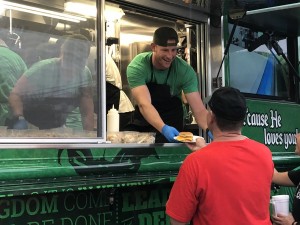 Carson Wentz announced that Thy Kingdom Crumb, a partnership between Wentz’s AO1 Foundation and Connect Church, would make its debut at the ACME Supermarket located on Passyunk Avenue in South Philadelphia.

Thy Kingdom Crumb is on the surface a food truck, dreamed up by Connect Church senior pastor Kyle Horner eight years ago. The plans changed and evolved, but escalated and expanded once the AO1 Foundation became involved. But in essence, Thy Kingdom Crumb can meet people where they are and provide support and community for those in need.

“It’s kind of the heartbeat of our church; it’s the heartbeat of Danielle (Kyle’s wife) and I just to love people,” Horner said. “I love food. I love to cook. Free food is awesome. It’s a bridge. What do people do when they have community, you sit and eat together. You hang out together. You talk over meals. You break bread together. That’s part of what this was all about.”

While most people learned about Thy Kingdom Crumb’s arrival when Wentz posted on social media, Michael Buonadonna was already waiting in line. An employee at the ACME Supermarket, he worked a 7 a.m.-2 p.m. shift. He then waited to be the first person to receive a meal from the truck – either a pulled chicken sandwich or a Southwestern pasta salad with grilled shrimp – directly from Wentz himself, who dished out food along with Zach Ertz while Chris Maragos and his two sons, Micah and Mason, handed out drinks.

“It was amazing. I love him. I’m so glad he’s back from recovery and he’s finally going to do what he’s meant to do. I can’t wait to see him in action,” Buonadonna said. “He does a lot for the community. He does a lot to help the people.”

Jennifer Hildebrand was home in South Jersey when she saw Wentz announce the visit and figured, why not make the trip to Philadelphia? Sporting her AO1 Foundation T-Shirt, Hildebrand brought her 2-year-old daughter Chloe, dressed in a Wentz jersey.

“We’re a Christian family, so it’s lovely to see that a highly reputable athlete is tying in that background with Christianity and promoting it within our community,” said Hildebrand, who also traveled with her sister. “To have that opportunity to show our kids that there’s so many ways you can give back. Of course donating money, doing different things to support those causes are important, but just to have that tie-in to our hometown pride with our Eagles is extremely important for us too.”

Thy Kingdom Crumb, which will make appearances at Eagles home games, enlisted the help of about 30 workers to have 2,500 meals available. Fans fist-bumped Wentz and Ertz while receiving their food, and snapped selfies with the players. A few people asked Wentz whether or not he would play Thursday night in the regular-season opener against Atlanta, of course he was not going to divulge. But on this summer night, families from around the neighborhood turned the ACME Supermarket parking lot into a gathering, which is this truck’s ultimate purpose.

“It’s very humbling to see the fans, the community come out. It’s so cool to see a vision come to life for Kyle and Connect Church. It’s been such a work in progress behind the scenes to get to this point,” Wentz said. “We just started believing that lives can be changed. Obviously, we’re providing physical food, but we believe we’re providing something spiritual that’s going to change lives and change the shape of eternity for many people. It’s just getting started and we’re having a blast with it.”

This is Maragos’ fifth season in Philadelphia and he admires how Wentz is making himself a fixture in the community. 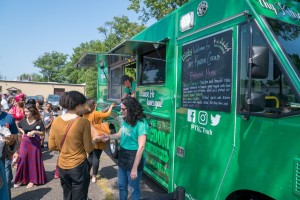 “You see Carson extending himself and meeting people right where they’re at,” he said. “He’s coming to them. He’s taking this mobile truck in places where he can reach people that he might never be. It’s pretty cool to see the vast impact that it’s having and the types of lives he can touch through it.”

Wentz admitted that he felt a special connection with the city from the moment he arrived here. He established the AO1 Foundation after his rookie year of 2016 because he didn’t want to wait to leverage his ability to impact the lives of others. Wentz embraces all of the responsibility that comes with being not just a franchise quarterback, but the Eagles’ franchise quarterback.

“It’s definitely something I don’t take lightly. This game gives you a platform that is second to none and is something I don’t take for granted,” Wentz said. “I was once that kid looking up at athletes and looking up to them as men on and off the field. I want to be a good role model, be someone that kids can look up to and try to model their walk as a man, their walk in their faith. I just want to ultimately point to Jesus along the way. I believe that people will be more emboldened with their faith seeing athletes like myself and Zach and Maragos and others along the way speak openly, unashamed about their faith, and I think that will really just start to create a change in this community.”