The many thousands of victims of sexual abuse, most of them male, at the hands of Roman Catholic priests, must have felt a special wave of revulsion reading about the news of a Catholic Church approved ‘fashion show’ that was dripping with sex-infused imagery of models wearing outfits inspired by Vatican clothing and headgear. But no surprise here. The Catholic Church is not a Christian organization, they are in fact the Whore Of Babylon mentioned in great detail in chapters 17 and 18 of the book of Revelation as found in your King James Bible. The Catholic harlot has always loved money, wealth and power, and this is just another example of how corrupt and wicked the Vatican truly is.

Wonder where Rihanna scored that bejeweled papal-looking hat for the recent Met Ball celebrating the Costume Institute’s exhibit of Vatican fashion? Turns out the miter was a loaner — from Cardinal Timothy Dolan, the head of New York’s Roman Catholic diocese. 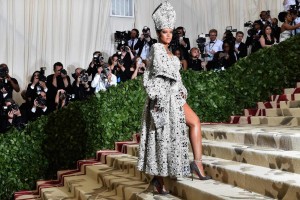 “The news said she was wearing a tiara,” Cardinal Dolan said Tuesday in an interview on SiriusXM’s The Catholic Channel, noting that it was in fact a miter of the sort worn by bishops and cardinals on formal liturgical occasions. “She gave it back to me this morning. … She was very gracious.”

Cardinal Dolan conceded that the miter was a good match for the pop star’s beaded white corset dress with matching jacket and clutch, custom made by John Galliano’s Maison Martin Margiela.

“I was teasing my auxiliary bishops, who were teasing me about Rihanna and I said, ‘Hey, you guys should not complain because she’s volunteered to do some confirmations,’” Dolan joked. (We’re guessing that the pop star won’t actually be filling in for any of the diocese’s bishops to perform that sacrament.)

“And the woman was arrayed in purple and scarlet colour, and decked with gold and precious stones and pearls, having a golden cup in her hand full of abominations and filthiness of her fornication: And upon her forehead was a name written, Mystery, Babylon The Great, The Mother Of Harlots And Abominations Of The Earth.” Revelation 17:4,5 (KJV) 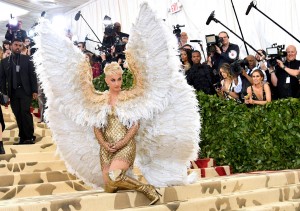 NEW YORK, NY – MAY 07: Katy Perry attends the Heavenly Bodies: Fashion & The Catholic Imagination Costume Institute Gala at The Metropolitan Museum of Art on May 7, 2018 in New York City. (Photo by Dia Dipasupil/WireImage)

The annual fundraising fete in New York brings out Hollywood’s elite to celebrate the spring exhibit at the Metropolitan Museum of Art’s Costume Institute, with this year’s titled: ‘Heavenly Bodies: Fashion and the Catholic Imagination.’

Pop star Rihanna created the biggest stir, attending in a short skirt, robe and mitre-like hat reminiscent of the Pope’s headgear.  Katy Perry – who met Pope Francis on April 28 – also drew a lot of attention by coming dressed as an angel, complete with huge feathered wings.

Cardinal Timothy Dolan, the Archbishop of New York, gave a statement at the press launch of the star-studded show saying he was in attendance to ‘thank God for beauty’.

But this didn’t seem to satisfy many on Twitter – with several enraged Catholics blasting the collaboration between the Church and the Met Gala as ‘blasphemy’.

The News.com.au piece added: ‘If you’re a victim of clergy sexual assault who is fighting for compensation from a church that regularly cries poor — including the 16,000 Australians who made contact with the Australian Royal Commission into Institutional Responses to Child Sexual Abuse — seeing a bunch of celebrities prance around in the ostentatious and sexually confused fashions of the Church must feel like a slap in the face.’

A victim support lawyer in the country, Ingrid Irwin, said: ‘Celebrities should be boycotting this ball and giving all the money it would have cost to survivors.’

Despite the controversy surrounding the ball, the Catholic Bishops’ Conference of England & Wales said in a statement: ‘The exquisite care and attention to detail shown in the works produced for this exhibition reflect the love and desire to give glory to God shown in the beautiful original religious vestments from which they take their inspiration.’