He was one of 250 Christians captured by ISIS militants in Syria. Miraculously, with the help of a Muslim friend he managed to escape their clutches and regain his freedom October 11th. Recently, he described his captivity and the remarkable resolve of his fellow Christian captives. 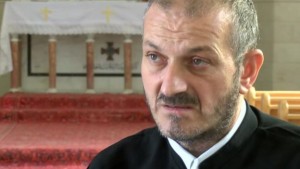 “Even while being deported, with my hands tied behind my back, I surprisingly found myself repeating again and again: I am going towards freedom,” Father Jacques Murad told Arab Christian broadcaster Noursat TV.

Before his abduction on May 21st, Fr Jacques belonged to a monastic community on the outskirts of Al Qaryatayn. His community was founded by the Italian Jesuit Paolo Dall’Oglio, from Rome, who disappeared in 2013 from Raqqa, Syria, which became a stronghold of ‘Islamic State’ jihadists, according to Agenzia Fides, the information service of the Pontifical Mission Societies.

After his capture, ISIS militants took Fr Jacques to the city of Palmyra, where he was placed in a dorm that included 250 other Christians, also captured from the same area.

“The Christians were often questioned about their faith and about the Christian doctrine, and they did not convert to Islam despite much pressure,” he recounted.

“Almost every day there was someone who came to my prison and asked me ‘what are you?’ I would answer: ‘I’m a Nazarene, in other words, a Christian.’

“So you’re an infidel!” the ISIS militant shouted. “Since you’re a Christian, if you don’t convert we’ll slit your throat with a knife.”

The excruciating pressures related to his abduction and captivity brought an unexpected result. “This experience of trial strengthened the faith of everyone including my faith as a priest. It is as if I have been born again,” he declared.

More than anyone, he was surprised by attaining his physical freedom – and a renewed spiritual freedom by God’s grace. Among other experiences, Fr Jacques said he celebrated a mass in the underground dormitory with the other captives.

“I want to thank all those who prayed for my liberation,” he said. “It’s truly a miracle that a priest has been freed from the hands of the Islamic State.”

Currently Murad is working with an Orthodox priest to help free other Christians held in captivity by ISIS.