By Mike Adams, the Health Ranger
(NaturalNews) News has been rapidly exploding across the “truth media” regarding the CDC whistleblower who is now making shocking revelations: The CDC’s own research found that MMR vaccines caused autism in African-American children, and the agency knowingly buried this evidence to hide it from the public.

The CDC whistleblower who is stepping forward with all this information has been “haunted” by this cover-up for the last 12 years, and this person has now decided that protecting public health and scientific integrity is more important than protecting vaccine profits.
The scientific conspiracy went all the way to the top of the CDC, where Dr. Julie Gerberding — now an executive with vaccine maker Merck — took an active role in the cover-up and even arranged to have the whistleblower punished for trying to tell the truth. 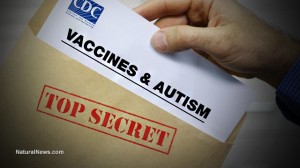 Now we know that the CDC has also refused to turn over this information to Congress, too. U.S. Congressman Bill Posey (8th district, Florida) requested the documents from the CDC in a congressional hearing, but the CDC has stonewalled, refusing to turn over anything. This resulted in Congressman Posey calling for the CDC to be investigated. “The CDC can’t be trusted regarding investigating vaccine safety,” Posey said. “Huge conflict of interest. I think the CDC should be investigated.” The full interview is available on the Autism One website.

This is all described in detail in this Age of Autism story which also delves into the runaway criminality of the CDC and its quack science front men such as Dr. Poul Thorsen. Dr. Thorsen — who was indicted by the Dept. of Justice for an elaborate money laundering scheme involving the CDC — engaged in exactly the kind of lies and deceptions we see reflected in biotech propagandists like Jon Entine, where so-called “scientific experts” routinely resort to outright lies and fabrications to protect corporate interests and try to silence skeptics.

Dr. Thorsen was a key conspirator who falsified research to “prove” that vaccines didn’t cause autism. This fraudulent research continues to be cited today by vaccine pushers, most of whom are fully aware of the dangers of vaccines but seem to want as many children to be harmed or killed as possible. The CDC took an active role in shaping this fraudulent research and funneling money into the hands of Dr. Thorsen so he could continue to carry out his vaccine fraud.

What’s now abundantly clear is that the CDC is operating what can only be called a “criminal racket” that’s steeped in scientific fraud for the sole purpose of hiding from the public the truth about MMR vaccine dangers. The CDC possessed irrefutable evidence in 2002 that MMR vaccines caused a 340% increase risk of autism in African-American babies, yet instead of warning the public, the agency’s top scientists and executives actively conspired to bury that evidence.

Now that Congressman Posey is attempting to get some answers, the CDC is also stonewalling his office.

I called Congressman Posey’s office and spoke with his media contact, who assured me the following statement from Posey is official and on the record:

“When it comes to our children, we must make sure that any intervention is as safe as possible, including vaccinations. Scientific integrity is a key component to giving that assurance. I will continue to press for a full understanding of the evidence in this situation. The CDC has refused for more than six months to hand over documents I requested concerning this issue. That is not the type of response we expect from our government.”

When I asked for further clarification, Congressman Posey’s spokesperson explained, “We want to see the truth come out, and ultimately we want to see proper studies done so families can have assurances… and so the public knows the proper course of action regarding vaccinating their children.”

The CDC, of course, absolutely does not want the truth to come out. That’s the whole point of burying the evidence and refusing to turn over documents to Congress. In this regard, the CDC is acting in almost exactly the same way the IRS has been behaving regarding its targeting of conservative non-profit groups. These government departments, it turns out, behave like criminal fiefdoms beholden to no one.