Chef, 90, Faces Jail and Fines for Feeding the Homeless

According to a story by Zachary Fagenson for Reuters News Agency, for his good deeds, Abbott finds himself facing up to two months in jail and hundreds of dollars in fines after new laws that restrict public feeding of the homeless went into effect in Fort Lauderdale earlier this year.

“I’ve been fighting for the underdog all my life, so this is nothing new,” Abbott said.

However, what is new is the spate of global publicity the issue has caused. 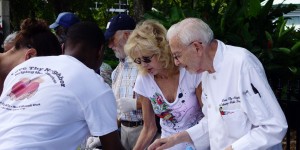 According to a story by Mike Clary writing for the Sun Sentinel, Abbott said, “I’ve had calls from Moscow and Syria. The phone is ringing every 15 seconds.”

The Sun Sentinel said he spoke from the kitchen of his home, a day after police for the second time charged him with violating a new law aimed at the public feeding program he has run since 1991.

He added, “The support has been unbelievable. I am both humbled and exalted by it … The city mayor and the commission are puppets of the mega-rich who live in Fort Lauderdale, and they want to get rid of the homeles s. There are others out there who feed people on the street, but the city can scare them. I think this law is primarily aimed at us.”

He was first cited last Sunday, along with two clergymen and a volunteer from his nonprofit, Love Thy Neighbor.

On Wednesday, Reuters reported, several police cars waited for Abbott at a downtown Fort Lauderdale park, and officers pulled aside the frail man, dressed in a white chef’s coat, soon after the first plates were ready to be served.

“The ordinance does not prohibit feeding the homeless; it regulates the activity in order to ensure it is carried out in an appropriate, organized, clean and healthy manner,” Reuters reported Fort Lauderdale Mayor John P. Seiler said in a statement.

Abbott moved to Florida from Massachusetts in 1970 and was a civil rights activist and wholesale jewelry salesman. He and his wife first began feeding the homeless on their own in 1979. He started the foundation and feeding full time in 1991 after his wife died, in a tribute to her memory.

Reuters said the dispute highlights a debate between two schools of homeless rights activists. Those who argue that banning public feeding criminalizes the homeless, and others who say feeding and panhandling helps keep them on the street.

Since Jan. 2013, 21 cities across the country have passed laws restricting public feedings and 10 more have similar rules under consideration, according to an October report from the National Coalition to the Homeless. Nationwide, at least 57 cities have limited or banned public feeding.

“One of the reasons these kinds of ordinances are being embraced is that this is what cities can do without spending money,” said Jerry Jones, the coalition’s executive director.

Reuters said a widely agreed-upon solution – giving the longtime homeless beds as they work their way into treatment programs – is too costly for many municipalities that struggle with homelessness.

But advocates for the homeless say that ignores the costs of not addressing the issue in a compassionate way.

“What’s the cost if somebody presents themselves five times annually to an emergency room?” asked Ron Book, a high-profile Florida lobbyist who chairs Miami-Dade County’s Homeless Trust with a tax-backed, $55 million budget.