China and Russia Warn the U.S.

Do Not to Seek North Korean Regime Change

By Ting Shi and David Tweed

“ICH” – In supporting a watered-down version of North Korea sanctions, China and Russia had a stern warning for the U.S.: Don’t try to overthrow Kim Jong Un’s regime.

The measures passed at the United Nations Security Council included reducing imports of refined petroleum products, banning textile exports and strengthening inspections of cargo ships suspected of having illegal materials. U.S. envoy Nikki Haley called them the “strongest measures ever imposed on North Korea” even though they ended up dropping demands for an oil embargo and freeze on Kim’s assets.

More worrisome for China and Russia was Haley’s remark that the U.S. would act alone if Kim’s regime didn’t stop testing missiles and bombs. The UN representatives of both countries reiterated what they called “the four nos”: No regime change, regime collapse, accelerated reunification or military deployment north of the 38th parallel dividing the Korean Peninsula.

“The Chinese side will never allow conflict or war on the peninsula,” Foreign Ministry spokesman Geng Shuang said in a statement recently.

The comments in the wake of the sanctions signaled that both China and Russia are only willing to go so far in pressuring Kim to abandon his attempts to secure the ability to strike the U.S. with a nuclear weapon. Both nations have called for dialogue, something President Donald Trump has resisted.

China and Russia realize their combined effort “works better than individual action,” said Wang Xinsheng, a history professor at Peking University. “Both oppose North Korea to become a full-fledged nuclear state, and both think parallel action from the U.S. is needed to affect any change in the situation.” 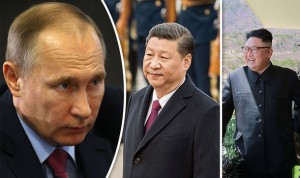 China and Russia — the biggest economic patrons of North Korea — both share the view that North Korea won’t give up its nuclear weapons without security guarantees, and they don’t see the point in fomenting a crisis on their borders that will benefit American strategic goals. At the same time, they don’t want Kim provoking the U.S. into any action that could destabilize the region.

“Sanctions of any kind are useless and ineffective,” Russian President Vladimir Putin told reporters earlier this month at a summit in Xiamen, China. “They’ll eat grass, but they won’t abandon their program unless they feel secure.”

Still, analysts saw the efforts to dilute the original proposal as successful.

“The stiffer sanctions won’t change anything in the near-term,” said Stuart Culverhouse, head of macro and fixed income research at specialist frontier markets investment bank Exotix Capital. “The new embargoes are incrementally tougher, but diplomacy meant they had to be compromised to an extent that they are very unlikely to change minds in Pyongyang.”

North Korea has said it will never give up its nuclear weapons unless the U.S. drops its “hostile” policies toward the regime. Kim has claimed the ability to fit a hydrogen bomb onto an intercontinental ballistic missile, but the U.S. military says he has yet to master re-entry and guidance systems that would allow him to target an American city.

Many analysts think Kim will wait until he’s mastered his weapons before negotiating, as it would strengthen his hand. It might take tactical nuclear weapons in South Korea — something President Moon Jae-in has opposed — to bring Kim to the negotiating table earlier, according to Lee Ho-ryung, chief of North Korean studies at the Korea Institute for Defense Analyses.

“If South Korea, Japan, or both could have the U.S. deploy tactical nuclear weapons, that’ll put pressure on Kim to come to dialogue,” Lee said. “When competition to have better weapons escalates, it’s always the poorer one who gives up.”

George Lopez, a former member of the UN Security Council panel of experts for sanctions on North Korea, said that the U.S. should seek unity of message with China and Russia in addition to a unanimous vote on sanctions. The U.S. should look to engage diplomatically to find a level of security that North Korea and its neighbors will be happy with, he said.

“We did it against powers that have thousands of nuclear weapons,” Lopez said. “We certainly should be able to do this against a power that has less than two dozen.”

This article was first published by Bloomberg