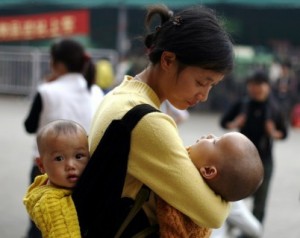 (WNS)–A researcher for the Chinese government announced last week that all couples in China will be allowed to have a second child in two years, the latest easing of the 1979 one-child policy, according to Bloomberg. While the modification is a step forward, critics believe the country’s issues of gender imbalance, a shrinking labor force, and forced abortions won’t be solved until the family planning policy is abolished and Chinese society begins to value life.

“People wish to choose the number of children they want to have, and they should be given the choice, at least for two children,” said Cai Fang, a vice director of the Chinese Academy of Social Sciences, in an interview Thursday. Last year, President Xi Jinping allowed couples to have two children if one of the parents is an only child. Ethnic minorities, rural villagers, or parents whose first child is disabled, are also allowed more than one child.

The modifications come as China worries about its shrinking labor force. As the birth rate drops and the population grays, the number of workers between 15 and 59 years old fell in 2012 by 3.45 million to 937 million. Cai said the country’s potential growth rate will decrease 6.2 percent every year from 2016 to 2020. He doubts the policy change allowing a second child will stop the population from shrinking, as China’s fertility rate hovers at 1.6 per women, lower than the 2.1 needed to sustain population levels.

Reggie Littlejohn, president of Women’s Rights Without Frontiers, said in a statement “the problem with the one-child policy is not the number of children ‘allowed.’ Rather, it is the fact that the CCP is telling women how many children they can have and then enforcing that limit through forced abortion, forced sterilization, and infanticide.” The government has deemed forced abortions illegal, but the practice still continues in the countryside. At the same time, cultural preference for boys has led to a gender imbalance as parents abort their baby girls.

According to the nonprofit group All Girls Allowed, in 2012 China had 18 million more boys than girls under the age of 15. The effects of the gender imbalance is wide-reaching—by 2020, the Chinese government estimates 30 million men of marriageable age will be unable to find a spouse. That has already led to an increase in sex trafficking and the kidnapping of girls to provide future wives. Historically, a surplus of single men increases the likelihood of social unrest. And one house church pastor in southwest China speculated the gender imbalance could also lead to a rise in homosexuality.

With abortions commonplace in Chinese society, the battle for many Christians is not only changing policy but also changing views on the sanctity of life. Even after Xi’s relaxation of the one-child policy last year, less than 3 percent of the 11 million couples eligible to have a second child actually applied for permission in the first six months, according to the National Health & Family Planning Commission. Churches and organizations are starting to teach about what an abortion entails and how every child—regardless of gender—is made in the image of God.

On the policy front, Littlejohn sees the recent moves as insufficient: “China’s forced abortion policy does not need to be modified. It needs to be abolished.”