(WNS)–Chinese officials are defending their human rights record and lashing out at a U.S. commission that accused the country’s communist government of continuing to commit “severe religious freedom violations.”

The latest annual report from the United States Commission on International Religious Freedom (USCIRF) called for China to be re-designated a “country of particular concern.” 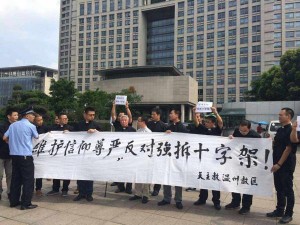 “During the past year, as in recent years, the central and/or provincial governments continued to forcibly remove crosses and bulldoze churches; implement a discriminatory and at times violent crackdown on Uighur Muslims and Tibetan Buddhists and their rights; and harass, imprison, or otherwise detain Falun Gong practitioners, human rights defenders, and others,” USCIRF said of China.

Chinese Foreign Ministry spokesman Hong Lei disputed the U.S. assessment on May 5. “The Chinese government fully respects and safeguards Chinese citizens’ freedom of religious belief,” he said during a news conference. “Chinese citizens are entitled to the right of religious freedom under the law.”

But groups monitoring persecution of Christians said USCIRF’s assessment is spot-on. “I’m not very surprised by this pushback from China. But there are minorities being hurt in China, especially religious minorities,” Open Doors USA spokeswoman Emily Fuentes said. 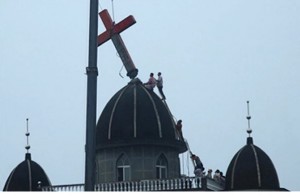 “Unless China addresses its campaign to whitewash Christianity and continue to persecute religious minorities, organizations like USCIRF and ICC will continue to address the severity of their action and inaction,” ICC said.

Chinese Christian Ding Cuimei died in April after being buried alive by a bulldozer demolishing her church in Henan Province. A local developer was trying to take control of the property. Two weeks later, local authorities ruled the disputed land belongs to the church, but so far the people responsible have not been charged, according to China Aid.

Compared to the Middle East, China has seen improvement overall, Fuentes said. But in certain regions there are still “pockets” of persecution against religious minorities, including Christians. Open Doors ranked China 33rd on its World Watch List in 2016.

USCIRF found that in 2015, China heightened its crusade against “three evils:” separatism, terrorism, and religious extremism. That led the government to target human rights lawyers and dissidents, including advocates for religious minority groups. In July, officials detained or arrested nearly 300. Others simply disappeared. Many were later released.

In April, a closed-door meeting of the National Conference of Religious Work worried some Chinese Christians, UCA News reported. At the event, Chinese President Xi Jinping laid out a religious management plan.

Some Christians think the move indicates plans for even tighter control of religion.

“It is the old tune, control will only be stricter. The government will interfere with religious affairs in the name of ‘the rule of law,’ so what kind of freedom of religious belief is left for us?” an unnamed underground bishop told UCA News.