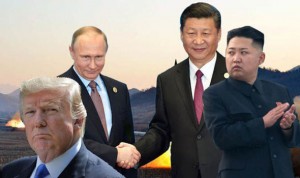 The People’s Liberation Army of China has been conducting military exercises on the Korean border in preparation for war breaking out between the US and North Korea.

The fear of war between the two countries has risen over the past several months after China’s neighbour carried out a number of illegal missile tests and threatened to target the US territory of Guam with a nuclear missile.

Following the announcement regarding China’s new military drills, military expert Li Jie has given her verdict as to who the country would side with in any future conflict. She said: “The timing of this high-profile announcement by the PLA is a warning to Washington and Seoul not to provoke Pyongyang any further.”

China’s Air Force sent its surveillance aircraft to the Yellow Sea and East China Sea in the last few days claiming it was there to “improve combat-readiness and safeguard the country’s strategic interests”.

The aircraft took a flight path not previously flown to regions they had never previously operated in, and coordinated with fighter jets, alert aircraft and guided missile forces, spokesman Shen Jinke said, according to a post on the Air Force’s official microblog.

The move comes as the US prepares to conduct its own military drills in the region with South Korea. The allies currently have up to 260 aircraft training in an exercise which simulates how an air war with Kim Jong-un’s rogue state would play out. The two countries have been carrying out the war-game scenarios for decades.

Russia and China had urged the cancellation of the US’s five-day program, in exchange for North Korea halting its weapons programs. Beijing formally calls the idea the “dual suspension” proposal. President Trump’s military refused to do so and may be partially responsible for why China chose to conduct its own training drills.

China has become increasingly frustrated with US President Donald Trump’s handling of Kim Jong-un’s rogue nation. The US had tabled a resolution in September to the UN Security Council which increased sanctions on the country. However, Trump has since gone further and demanded that China cease all trade with their neighbouring country.

China has reacted angrily to the demands. “The nation’s state-run Global Times said: “We can neither persuade Pyongyang nor sway the opinion of Washington. “When tensions on the Korean Peninsula reach a new height, a large portion of the pressure is transferred to China. “But the US and North Korea must shoulder their own responsibility without making China the scapegoat.”

They went on to say: “The only thing China can do next is to firmly uphold its principles, strive to alleviate tensions while at the same time preparing for the worst.” It concluded: “Beijing is fully prepared to use its prowess to defend its national interest. China owes no one anything, and other countries must know this.”

It has long been believed that China has been loyal to North Korea because they fear the destruction of the state would leave them responsible for dealing with any refugee crisis that may emerge.