A Chinese Christian woman was arrested by public security bureau officers and criminally detained after she attempted to share the gospel with President Xi Jinping.

Persecution watchdog China Aid reports that on March 15, Zhou Jinxia, a Christian who traveled to Beijing from Dalian, arrived at the front gate of the former imperial garden Zhongnanhai, holding a sign that read, “God loves the people of the world and is calling out to Xi Jinping.”

Her objective, the outlet says, was to reach Xi while the National People’s Congress (NPC) and the Chinese People’s Political Consultative Conference (CPPCC) convened. 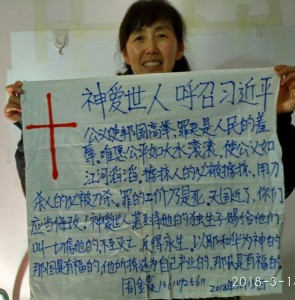 Zhou Jinxia pictured with one of her controversial signs China Aid

However, a short time later, the director of the Huanghe Street Police Station, based in Dalian, brought her away, and she was escorted back to her hometown overnight. The next day, the Xigang Branch of the Dalian Municipal Public Security Bureau criminally detained her.

Days before, her friend called to inform her that the police have accused her of being a suspect at large and are looking for her.

The incident was not the first time Zhou had come under fire for her religious zeal; China Aid reports that she had traveled to Zhongnanhai several dozen times in the past few years to spread the Gospel and has either been detained or abducted each time.

In 2016, the Christian woman spent 10 days in administrative detention after another visit to Zhongnanhai, where she held a sign that said “God loves the people of the world and is calling out to Xi Jinping and [Xi’s wife] Peng Liyuan. Atheism nurtures sin and brings down the people. The kingdom of heaven is at hand; you should repent.” The police called this act “disturbing social order” and confiscated her materials.

Last year, Zhou and another Christian from Anhui, Shi Xinhong, went to the Great Hall of the People in Beijing and attempted to preach to the attendees of that year’s meeting of the NPC and CPPCC. Both of them received the charge of “picking quarrels and provoking troubles” and were criminally detained.

However, China Aid warns that due to China’s revised Religions Affairs Regulations, which came into effect in February, the latest incident may result in Zhou being prosecuted by authorities.

The regulations, which define the administrative framework around religious activities, have the stated aim of “protect[ing] citizens’ freedom of religious belief”.

According to Reuters, fines for breaking the rules have also been increased in the new version and the organizers of unapproved events can now be subject to fines from 100,000 to 300,000 yuan, rather than the previous 1 to 3 times the amount spent on the event.

Persecution watchdog Open Doors USA has ranked China 43rd on its World Watch List of 50 countries where Christians face the most persecution.

A primary source of persecution, Open Doors says, is the Communist government. “Christians, in particular, are hedged in by authorities, as they are the largest social force in China not controlled by the state,” notes the outlet.