Will you be a hero, a victim, or a just a survivor in the coming holocaust? Half of the human race will not live to see the scheduled millennium.

The present generation of mankind has been chosen by God to go through the most harrowing time ever seen. If the much anticipated rapture of the church fails to materialize in the time projected by the pre-trib theory, the church will be here in time to come along with the unsaved of America and the uncounted billions living in Asia, Europe and Africa when chaos arrives.

Individually, each of us has been chosen by God for this particular time period for purposes known only to Him. One day, hopefully we will be able to look back and understand much more about the final days of human history. 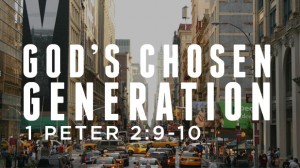 Why have we been chosen to be part of the “Chosen Generation?” Only He knows, but we rest assured there are no mistakes in God’s agenda. Nothing will be allowed that could upset His plan for mankind. We have been selected by the Maker of All Things to live at this particular time of history. Perhaps because we are destined to reach potentials far beyond what we can conceive, or maybe we’ll be among the early casualties in days to come. Either way, if we are in Him, and He in us we can’t go wrong.

We are bombarded daily with “The Threat of the Day, “Probable war in the Mid-East, threatened nuclear attack on Israel, possible war between China and Japan, war between Russia and NATO, etc. etc…wars and rumors of wars” (Mt 24:6, Mk 13:7).”

Also on the daily radar are stories of possible EMP explosions that will knock out all electronics in North America and there are fears of hackers who are about to penetrate our electrical grid, shutting down the power that in turn will knockout water supplies and every activity that relies on electricity.[1]

Lately we see stories posted almost by the hour about coming military exercises called Jade-Helm and speculation that a cyber attack may be linked to the coming maneuvers.[2] There appears also to be much evidence of foreign troops (Russian and Chinese) practicing combat in hidden-away areas in secluded portions of our national forests, in preparation for war against the American people.

It’s entirely possible that a cyber-attack, or a deliberate shutting down of the internet and telephone communications will render any resistance to martial law largely crippled while those bent on domination will still be able to communicate on other networks.

There is also evidence that Fukushima radiation is killing the Pacific Ocean fishing industry. We have drought in California and bird flu in Minnesota and North Dakota. Alongside that is a mounting avalanche of evidence that financial collapse is either likely or planned, for the coming fall season of 2015. Evidence is also present that economic boom and bust cycles are due to bust next and prominent prognosticators chart the implosion to occur in the fall of 2015. The testimony of financial experts seems to be endless and it appears wise to listen to them, then pray for the best and prepare for the worst.

Then we have the second start-up of CERN, headquarters for the Large Hadron Collider, reportedly the largest mechanical device ever built on planet earth ostensibly built to find the “God Particle,” or a replication of the “Big Bang.” An exercise which, attributed to acclaimed Physicist Stephen Hawking, has the potential to cause enormous problems.

Many take Hawking’s fears to mean we could possibly blow up the universe. Others worry that the CERN may inadvertently (or perhaps on purpose) open a “portal” to another dimension, possibly demonic and unleash a malevolent alien invasion upon us.

Theories abound that as it was in the days of Noah, when giants roamed the land and evil stalked every aspect of life, it is about to become again. God took care of that with a flood that wiped them all out but preserved Noah and his family for a fresh start. This time though, redemption has already been presented to the human race in the form of Jesus Christ and there will be no more new beginnings.

On top it all the “Shemitah Cycle” is being promoted by different authors and this too is apparently scheduled for the same time period (Fall of 2015), with the cherry on the top of the plate set before us being the tetrad phenomena of four “blood-red” moons in a row interspersed with a solar eclipse and a few more following closely behind. The last blood moon is scheduled for September 28, 2015. God controls the cycles of the stars, the moon and the sun and we wonder if He is signaling something to which we should pay close attention. After all He said in Genesis 1 heavenly bodies will be used for signs as well as for seasons.

Hitler killed an estimated 13 million innocent people. Stalin’s scorecard has been estimated at 60 million and Red China reportedly exterminated a like number. World War 2 claimed more than 50 million lives but all that is peanuts compared to what is before us. In the coming holocaust predicted in Scripture a staggering (3 ½) three and one half BILLION will die (half of the population, Rev 6:8, 9:18). The choices you and I make now may decide whether or not we will be in that number. Of course, anyone can be killed in a catastrophe. That’s beyond our control, but we can make sure we live forever in heaven. It requires honesty and a humbling of ourselves, a commodity sorely lacking in most.

When Hitler took power it was estimated that 98%of Germany’s pastors rolled over in fear of the 3rd Reich and justified their cowardice by quoting the first two verses of Romans 13:

Ro 13:1: Let every soul be subject unto the higher powers. For there is no power but of God: the powers that be are ordained of God. 2 Who so ever therefore resisteth the power, resisteth the ordinance of God: and they that resist shall receive to themselves damnation.

That’s where they stopped. They didn’t go on to verses 3 and 4 and the remainder of the chapter where it’s plainly taught that only good and legitimate governments are to be obeyed.

Ro 13:3For rulers are not a terror to good works, but to the evil. Wilt thou then not be afraid of the power? do that which is good, and thou shalt have praise of the same: 4 For he is the minister of God to thee for good. But if thou do that which is evil, be afraid; for he beareth not the sword in vain: for he is the minister of God, a revenger to execute wrath upon him that doeth evil. (Emphasis added)

If the Christian pastors of the above mentioned countries (and others) had vigorously resisted the encroachments of dictators as Deitrich Bonhoeffer and a few others did, the German Holocaust could have perhaps been avoided and millions would have cheated death. God did not create his children to be needlessly executed by sadistic monsters.

If we follow the example of Bonhoeffer in resistance, much mass murder can be avoided. If however, despite our efforts we find ourselves enslaved, then the example of Richard Wurmbrand (Voice of the Martyrs) can be employed. He spent 14 years in a Romanian Communist prison and while there led many to Christ and witnessed to everyone he came in contact with.

WHAT DOES THE BIBLE TEACH?

Is an earth-shaking calamitous event in our near future? There may well be, but the best course if we are to survive to witness the 2nd coming of Christ is to study history, particularly true history as given in the Holy Bible. In days to come we will see things that will rattle the earth. Many will profess to belong to Him but the shaking out will tell the tale. He will divide the sheep from the goats.

Nu 16:5 And he spake unto Korah and unto all his company, saying, Even to morrow the LORD will see who are his, and who is holy; and will cause him to come near unto him: even him whom he hath chosen will he cause to come near unto him. Does the Bible teach passive acceptance of evil? Of course not. The entire book of Acts is testimony of resistance of evil with God’s people spending a large amount of time in jail because of their active opposition to evil. Hebrews testifies of the cruelties suffered by those who resisted evil in both the Old and New Testaments:

“And others had trial of cruel mockings and scourgings, yea, moreover of bonds and imprisonment: 37 They were stoned, they were sawn asunder, were tempted, were slain with the sword: they wandered about in sheepskins and goatskins; being destitute, afflicted, tormented; 38 (Of whom the world was not worthy:) they wandered in deserts, and in mountains, and in dens and caves of the earth. (Heb 11:36-38)” 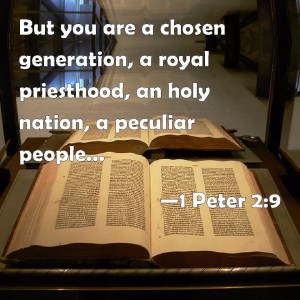 And they did all this by faith that God is a just God and is in total control of every situation. Our job is to trust God and then do everything we can to live as free men. Commanded by God, Moses left Midian, returned to Egypt and directly challenged Pharaoh, supreme leader (dictator) of the land that had imprisoned the Children of Israel. Empowered by the Word of God Moses didn’t understand submission to a tyrant and walked fearlessly into his presence and demanded. “Thus saith the LORD God of Israel, Let my people go.” The rest is history, but without his obedience to God there might not be a Christian nation today called America.

Elijah stood face to face with the wicked king Ahab and declared “There will be no rain in this land except by my word: (1Ki 17:1)” Elijah had never heard of Romans 13:1, 2. He opposed evil and didn’t consider Ahab as “the higher power.”

In days to come God will send his Two Witnesses to prophesy against tyrannical rule for 1,260 days as Antichrist throws everything he’s got against them in a vain attempt to silence their voices. Then, at the appointed time God will allow them to be killed only to put on a demonstration of resurrection that will freeze an image into the minds of the world of two old bearded men rising majestically into the clouds to live forevermore.

So as the church fiddles (and hides behind their 501-C3 status) while America burns, every one of us have a decision to make. Will we stand like men and resist like the biblical prophets and others of old, and like the revolutionaries of Colonial America, or will we cower like dogs and lick the hands of the Obamas, Bushes and Clinton’s and other purveyors of government tax status? Will we be able to overcome our would-be masters? Perhaps not, because this coming tragedy may be the precursor to Antichrist. We have a duty to try however because by so doing we may be able to at least delay the inevitable and see a few more people humble themselves and be saved before wholesale death stalks the land.

Eze 22:30 And I sought for a man among them, that should make up the hedge, and stand in the gap before me for the land, that I should not destroy it: but I found none.

Dick Carmack is a retired pastor living in rural New Mexico. The Carmacks have over 60 descendents with many in active Christian work. He has written three books and was a columnist for the Biblical Evangelist for four years.