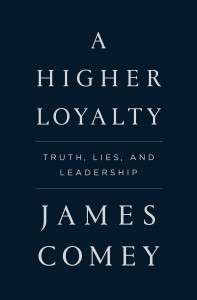 On Friday morning, our friends at Grabien flagged down quite the takedown of the much-anticipated book by James Comey thanks to Chris Wallace. The Fox News Sunday anchor ripped into the former FBI Director for having written a “bitchy” book full of “opinions” lacking bombshells that could do “more damage to his own reputation than he has to President Trump’s.”

Speaking on America’s Newsroom to co-host Sandra Smith, Wallace told her almost immediately upon being asked about it that “what strikes me is how little new there is in the book” with “a lot of opinions, very unpleasant opinions of the President by James Comey but in terms of hard facts, people are talking about bombshells” of which “[t]here are none.”

Wallace noted that much of what Comey stated about actual “facts of what the President did” were things he’s already stated in public to congressional committees. For all the disdain, Wallace pointed to Comey’s admission that “while he thinks the President’s behavior may have been unethical, it may not have been illegal.”

Then Wallace dropped the hammer:

The other thing that surprises me frankly is how bitchy the book is. Comey goes out of his way to say the President isn’t as tall as he thought he was. He checked out the size of his hands the first time they shook hands. That he noticed the President seemed to have little white half-moons under his eyes. Maybe he had sun-tanning goggles that he wore. You know, I think, one could argue that by getting into the kind of political food fight that James Comey has done more damage to his own reputation than he has to President Trump’s.

Smith then inquired about Comey comparing Trump to a mob boss and, once again, Wallace was not impressed.

“What you get is Comey’s opinions. He doesn’t like Donald Trump….but you know in terms of real damage, people talk about bombshells, all of that is going to be like Fire and Fury, the Michael Wolff book. It will be a Fourth of July sparkler that burns bright for a week and then just peters out….[Y]ou know, opinions or comparisons or rhetoric isn’t going to hurt the president. Facts will and there aren’t a lot of new facts in this book,” Wallace brutally opined.

He wasn’t done, closing out the segment by arguing that the President shouldn’t be tweeting about Comey but instead of not commenting because that would “help the book disappear as quickly as possible” that contains “no new hard evidence of any crime, of anything illegal.”