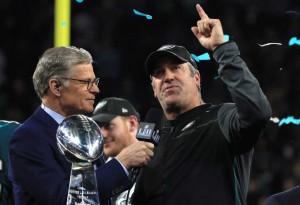 MINNEAPOLIS, MN – FEBRUARY 04: Head coach Doug Pederson of the Philadelphia Eagles celebrates with the Vince Lombardi Trophy as he is interviewed by NBC personality Dan Patrick after defeating the New England Patriots 41-33 in Super Bowl LII at U.S. Bank Stadium on February 4, 2018 in Minneapolis, Minnesota. (Photo by Mike Ehrmann/Getty Images)

Philadelphia Eagles coach Doug Pederson has praised his players for their faith, saying their belief in God was the “glue” that held the team together and drove them to a Super Bowl victory.

In a candid interview at the American Bible Society’s Faith and Football event, Pederson said it was “really impressive” to see the team lean on God throughout the season. The winning team had a number of committed Christians in their ranks, including star quarterback and Super Bowl MVP, Nick Foles.

“Having those guys and the relationships they have with each other and the relationships they have with Christ, I truly believe that was the glue that kind of kept the entire thing together,” Pederson shared. “The faith of the guys just sorta transcended the locker room a little bit. Really, during the times of adversity that we had, when we lose our quarterback, I really think that bond – those guys having relationships with one another and Christ – was the glue that kept them together.

“They are not only great football players but they are great men. They are better men off the football field than they are on the field. I am just so proud to be their coach, to love on these guys and to give back to the city of Philadelphia.”

Following the Eagles staggering win back in February, Pederson took the opportunity to declare his faith in Jesus. “I can only give the praise to my lord and savior Jesus Christ for giving me this opportunity and I’m going to tell you something: I’ve got the best players in the world,” he said at the trophy presentation.

So how does their faith affect their level of performance on the field? “You just see it through the quarterbacks. These guys, they are leaders in your football team. Being a quarterback, you have to have this calming presence. When things go wrong, there’s gotta be a calming presence. And these guys have it. But it’s truly because of their relationship with Christ that they can have that calmness when things begin to unravel.”

As you probably remember, there was an extraordinary moment in the Super Bowl final when Foles suggested to Pederson that they run a “Philly.” Pederson paused, then said calmly, “Yeah, let’s do it.” And boy did they nail it, with Foles faking and Trey Burton passing to him for a stunning touchdown. The score thrust the Eagles into a commanding lead of 41-33 and ultimately led to their victory. Pederson described that moment the two had a chat about the potential play, and said that Christ was at work through the whole thing.

“You saw it with the “Philly special” and the little dialogue Nick and I had,” he explained. “There was no panic. There was a calmness, there was a suggestion, there was a response. But we knew it was the perfect and right time for that play. It’s that humility that these guys show every single day that allows me to coach them, to trust them and put them in those situations – otherwise we don’t make those plays.”