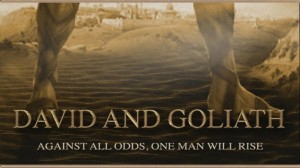 LOS ANGELES – An ancient Roman Hadrian coin was found on the set of the new high-profile movie, ‘David and Goliath.’

“It was amazing,” says the director Tim Chey. “We were shooting in a very remote area in North Africa and I was standing with a shepherd. He saw something on the ground and dug up a Roman coin with an emperor’s face on it.”

A similar coin sells for $4,700 on Ebay. The shepherd then gave the director the coin as a gift. What did Chey do with the coin? “I gave it back to the shepherd,” he says. “Couldn’t take it. I knew it might be very valuable.”

‘David and Goliath’ was filmed on locations never before filmed in Hollywood which excited the director. “It was virgin territory which made the shoot even more epic,” says Chey. “We shot in fortresses and valleys that could easily pass for Judah or Masada — I think the audience will be wowed.”

The film wrapped principal photography in North Africa and in studios in London.  ‘David and Goliath’ looks at one of the most powerful and beloved Bible stories of all time. The film will focus on the early life of David who fought against the Philistine giant, Goliath against all odds.

The epic, big-budget Christian movie, ‘Freedom,’ from Producer Tim Chey, opens next week in over 100 theaters throughout Australia and New Zealand. The film looks at two stories, one of them on the early life of John Newton, the former slave trader who wrote ‘Amazing Grace.’

“It was a long journey to get here,” says Chey, “but I’m happy it’s finally hitting theaters.”  The highly-anticipated film is also slated to open in theaters throughout the U.S. in early 2015.

Chey relates very well to John Newton’s own life as a young rogue who forever changed.  “John Newton’s life patterns mine in so many ways,” says Tim Chey. “He found Christ in a storm and his life changed forever.”

It took Chey eight years to research and write the script and nine years to bring the project to the big screen. The film has the 4th highest budget for a Christian film after ‘Passion of the Christ.’

“I was thrilled when Cuba Gooding, Jr. signed on,” says Chey. “He was my first choice. He read the script and said, ‘I’m in.'”

Chey’s friend, Dean Cundey (‘Jurassic Park,’ ‘Back to the Future’) also shot the movie. “The entire movie’s terrific look is because of one person: my friend Dean. He did a phenomenal job.”

Both epic films come at a perfect time. Hollywood is embracing faith-based films as of late and the audiences are growing at a record pace according to reports. ‘Freedom’ and ‘David and Goliath’ are set for an early 2015 nation-wide theater release.