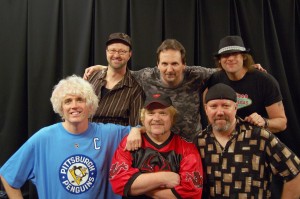 ApologetiX specializes in biblical parodies of classic and modern rock songs.  Jackson, who also writes the band’s lyrics, says “ApologetiX is best described as ’Weird Al’ Yankovic meets Billy Graham. We appeal to both the Christian and secular audiences.  I think we’re the only band that’s been featured on the radio shows of both Billy Graham and Howard Stern, not to mention ‘The 700 Club’ and ‘The Dr. Demento Show.’”

ApologetiX’s has recorded more than 20 CDs with a repertoire that covers the gamut of rock and roll from Elvis to today’s artists, with an occasional rap or country song thrown in for good measure.  Metallica’s “Enter Sandman” becomes “Enter Samson.” John Cougar Mellencamp’s “Jack and Diane” becomes “Iraq & Iran.” Green Day’s “The Boulevard of Broken Dreams” becomes “The Boulevard of Both Extremes.”  The Eagles’ “Life in the Fast Lane” becomes “Life in the Last Days.” Gimme Pre-Trib” is a parody of “Gimme Three Steps” by Lynyrd Skynyrd.

The band’s name comes from the word “apologetics,” which originally meant “the defense of the Christian faith.”  Just as the members of ApologetiX adapted that word for their own purposes, they adapt the words of famous songs through parody to convey a biblical message.  “We take our lead from the great theologian Mary Poppins,” Jackson adds. “’Just a spoonful of sugar helps the medicine go down.’  We take the Bible seriously. We just don’t take ourselves too seriously.” 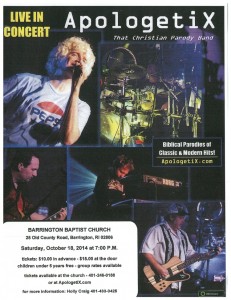 The band’s CDs are available at Christian bookstores throughout the United States and internationally. They are also available through the band’s website (www.apologetix.com) and as downloads through iTunes, amazonmp3, and other major providers.

The band has a fast-growing online fan club with more than 65,000 members, but Jackson says the members don’t measure success in terms of numbers:  “Our mission is the same as it’s always been — to reach the lost and teach the rest.  Every week, we receive hundreds of e-mails from people all over the world who’ve been touched by our CDs or concerts and are learning more about the Bible or are using our CDs to reach and teach others.  And that’s what it’s all about for us.”

Tickets are $10 in advance and $15 at the door.  (please plan to arrive 15-30 minutes prior) For concert tickets and more information, visit www.apologetix.com.