TOLEDO, Ohio – Sound of the House Records proudly announces the release of Freddy Rodriguez’s new single, “Amazed” and its accompanying lyric video hosted on YouTube. Nearly seven years after the successful release of Freddy Rodriguez’s popular, worship single, “I Will Run,” Freddy is back with a new label but returns with the same remarkable ability to prepare hearts for worship. Songs from this project are currently available on iTunes and at Christian bookstores nationwide. 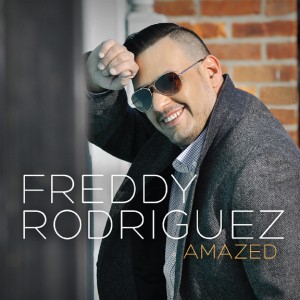 Grace, restoration, redemption and the “God of the impossible” are the focus of the songs on this project. With clarity, the songs express God’s ability to be the strength in a person’s life. Although the entire CD is full of great songs, some of Freddy’s favorites are “Your Grace,” “Tell the World,” “I Will Glorify” and “You Saved the Day.” Freddy believes the songs will powerfully connect with listeners’ hearts and urges those who love great worship music to purchase the CD.

Regularly, world renowned minister, Bishop Clarence McClendon of Full Harvest International Church invites Freddy to serve as his Worship Leader for special programs and occasions. With conviction, Bishop McClendon declares, “There are many gifted musicians and talented worshipers in the body of Christ, but not many people have a divine endowment that alters atmospheres and truly brings the presence of God to people. Freddy is one of those unique gifts.”

Gospel and Christian radio are steadily adding Rodriguez’s title-track, “Amazed.” Freddy is thankful and appreciative that radio stations around the country are early adopters of the new single. Radio stations wanting to add the single can request it via his new website, www.freddyrodriguezworship.com. The lyric-video for his new song, “Amazed” can be found on YouTube.

The Sound of the House Records’ CEO is Dove and Stellar Award nominated, songwriter, Derick Thomas. Derick Thomas’ songwriting is prolific having written the songs “It’s a New Season” and “Your Latter will be Greater” – two songs made popular by Christian music superstar, Israel Houghton. Thomas has also written for Vicki Yohe, Alvin Slaughter, Donald Lawrence and penned the popular tune, “No Limits” for Martha Munizzi.