(Christian Post) The mainstream film “I Am Michael” tells the true story of a former homosexual activist-turned-born again believer who becomes a pastor, but many Christians are disturbed by the film’s graphic display of gay sex scenes.

Although the film is the true story of Michael Glatze finding faith, many Christians are uncomfortable with the open display of homosexual acts featured throughout the film.

Evangelist and author Chris White said he opted not to see the film after reading critics’ reviews.

“I have already read reviews about the film. I completely understand Christians’ concerns about the graphic scenes in the film. Personally, I’m unwilling to put myself in front of graphic sex scenes whether homosexual or heterosexual. 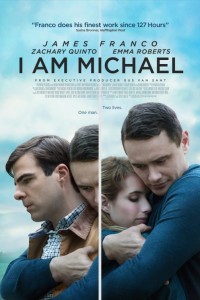 “Our generation is quite desensitized to these things, but that does not make it right. I am glad for a movie showing someone coming to repentance, but we need to be careful about glorifying the evil that they did before they came to repentance, something Christians are not always careful about,” White, a minister with the United Evangelical Church, added.

“I Am Michael’s” secular cast of James Franco, Emma Roberts, Zachary Quinto, and Darryl Hannah also leads some Christians to question the intention of the film.

Christian Hollywood public relations expert Hunter Frederick also shared his take on the backlash, telling The Christian Post in an email on Wednesday that: “In my line of work and experience, I’m never surprised at the notion that Hollywood can never seem to make Christians happy. The important thing to remember here is this isn’t marketed as a faith-based film, this is a secular film with a redemptive, Christ-centered theme.

“The keyword we need to look at here is ‘redemption,’ he added. “In order for there to be redemption there has to be a mess. We, as Christians, have got to stop focusing on every sinful detail and be thankful that Hollywood is starting to make redemptive, Christ-centered films for the masses.

The film debuted at the Sundance Film Festival in 2015, but was released for distribution on Digital HD from Amazon Video and iTunes on Jan. 27 and on DVD on March 7 of this year.

CP previously interviewed Glatze and his wife, Rebekah, after they received backlash from the LGBT community for penning an opinion piece in 2015 in which Glatze addressed “angry homosexuals” who criticized him for his lifestyle change in 2007.

“Right after we got married, the director, Justin Kelly, called us to congratulate us. We had a good conversation with him and I think he realizes that we’re not here trying to hurt anyone,” Glatze stressed. “We’re not sure where the movie will go with my life story, but we’ll pray that God will use it and we see it as a positive. James Franco has also told me that he isn’t interested in demonizing my character.”

At the time of Glatze’s life changing decision, he was a prominent activist and the founding editor of Young Gay America magazine. After a health scare he believed that his inner “promptings” led him to faith in Christ.

“I feel strongly God has put me here for a reason. Even in the darkest days of late-night parties, substance abuse and all kinds of things — when I felt like, ‘Why am I here, what am I doing?’ – there was always a voice there,” Glatze said in a column first published on WND.

He started his journey at a Mormon Church, then attended a Buddhist retreat center but eventually ended up at a small Bible college in rural Wyoming. It was in college where he met his wife and his life changed. They then went on to pastor a church in that area.

“I am here to live a good, God-honoring life,” he said. “And, as a Christian, I would be a liar if I didn’t tell people who God is, what He has done in my life and how He continues to provide for me in ways that are more numerous than I can count.”

A short film titled “Michael Lost and Found” will soon follow “I Am Michael” and show Glatze’s life as it is today. The second film is reportedly going to be “part response, part clarification, part apology, part redemption,” as stated on Facebook.

WARNING: The film’s trailer features scenes that many will find offensive.