(WNS)–Mike Farris’ Grammy-winning album Shine For All The People is the answer to those who view God as a cosmic Grinch (and Christians as His fun-squelching minions). With horns galore, a monster groove, and unbridled jubilance, the album is basically one giant celebration—and a well-earned one at that.

Farris wrestled with serious drug addiction for much of his adult life, including a cocaine overdose, according to an interview with CBN. After rededicating his life to God, he experienced powerful deliverance from the drug addiction, but then a back injury and subsequent surgery led to an addiction to pain medication. Finally, after much soul searching, three and half years ago Farris found himself truly sober for the first time since he was a kid. Little wonder, then, that freedom shines from every corner of this album.

Sometimes it’s the general call for men to “break all the chains,” such as in the rousing ’60s anthem, “How It Feels To Be Free.” Sometimes it’s the spiritual freedom conveyed by a hymn such as “Sparrow,” in which Farris manages to be both reverent and joyous with the help of a ragtime piano and a Dixieland motif. 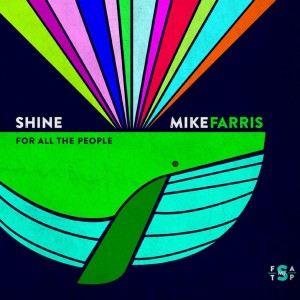 But freedom isn’t just a lyrical theme. It oozes from the album’s every pore, implicit in the luxurious horn arrangements and the fuel-injected attack of outstanding musicianship. Most of all, freedom reigns in the passion and power of Farris’ soulful singing, which is a cross of Van Morrison, Aaron Neville, and a coyote howling in the bayou.

“River Jordan” is the album’s opening powerhouse, featuring extravagant horn arrangements that yank the listener in by the collar. Funky drums keep the song grounded while a bass digs down to solemnize the lonely, bitter-sweet moment of our final pilgrimage to that better land.

“Jonah And The Whale” recalls the high stepping, keyboard grooves of Booker T. and the MG’s with some humor thrown in. Most folks will identify with Farris’ conclusion regarding Jonah’s adventure: “Sometimes I get that old funny feeling / I feel that same old whale swallowed me.” Swinging horn blasts and vocal call and responses stir excitement, but the real inspiration is Farris’ gritty, experience-driven goal to “walk with the Father in glory / go on and tell my story / tell the whole world … about my victory.”

Farris won this year’s Grammy for Best Roots Gospel Album and it’s no wonder. Chock full of hand-clapping, finger-snapping goodness, Shine For All The People is like something that popped right out of the Tennessee hills—a natural and inevitable force from what Flannery O’Connor called the “Christ-haunted South.” Yet Farris (who is from Tennessee) ensures the album is less Christ haunted than Christ embodied. Unlike so many rock-oriented artists who mine the gospel heritage, Farris obviously believes the lyrics he sings. This makes the album far more satisfying and spares believers the labor of parsing out a great performance from a lackluster spiritual commitment.

Farris ends well with an almost Beatnik rendition of “This Little Light.” Bongos and a stand-up bass prove marvelously suited to the song’s simple faith message, and a full band eventually joins in for a hearty jam session. The song is also an apt metaphor for Farris’s musical approach. He lets the beauty of these songs shine through, adding jazz, rock, and blues layers to accentuate their strengths rather than distract from them. The result is a feast for the ears and a feast for the spirit—at once shiny and new yet as comfortable as an old shoe.