Church and State in N.H.

The U.S. Supreme Court has ruled that legislative prayers, and even the use of taxpayer money to pay House and Senate chaplains, do not constitute the establishment of religion by government and are constitutional. But legislative bodies represent all people and constituents of all faiths or no faith at all. Sectarian prayers, and prayers that sides in political and legislative affairs, should be avoided. Outside of the Bible Belt that degree of separation between church and state is generally understood and respected.

The violation of that traditional separation that occurred recently in New Hampshire’s Executive Council meeting may be unprecedented. The council meeting was preceded by lobbying by the clergyman invited to lead the prayer, the self-described “Patriot Pastor” Garrett Lear of Wakefield, N.H. 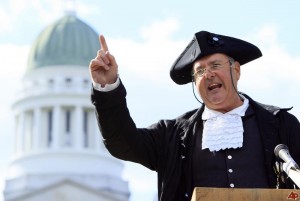 Lear preceded his appearance by sending an email message to each member of the all-male council urging them to vote against accepting a federally funded contract with Planned Parenthood to provide health care for New Hampshire women. Given his planned appearance at the invitation of Councilor Joe Kenny, that was inappropriate.

In his opening prayer, Lear invoked the Bible, and went on to say, “It is said often for if a baby is unsafe in his or her mother’s womb, no one is safe anywhere.” That may be something often said by Lear, but we could not find the quote in a search of the Bible.

Lear than addressed each councilor by name, a purposeful intimidation in our view, and asked that God help them make their decision to approve or deny the contract. That use of God’s name in an official proceeding in legislative chambers to influence a vote of enormous state importance was opportunistic, offensive and of questionable constitutionality. It was a disservice to government and religion alike.

The exceedingly poor judgement shown by Lear was exceeded by that of his defenders, Kenny and Councilor Chris Sununu. “If someone wants to come in and recite a prayer, it’s their prayer. If it touches on issues before us, that’s fine.” Sununu subsequently said.

No, councilor, it isn’t fine. In fact, no similar meddling by clergy in legislative affairs has occurred in the modern history of the state Senate, which follows guidelines that say prayers should be nonpartisan, not touch on issues before the body, and be nondenominational and universal. The Executive Council is clearly in need of similar guidance as Gov. Hassan recommended.

The prayer controversy is especially sad because Ray Burton, the beloved North Country councilor Kenny replaced, always voted for funding Planned Parenthood and he voted against an attempt to prohibit public funding of abortions. And it was doubly sad because in their public debate over the matter, Councilors Colin Van Ostern and Sununu described each other’s positions as “nonsense” and “ridiculous.” Gentlmen, don’t we get enough of that in Washington? – The Concord Monitor

Editor’s note: This editorial was published in the 8/15/15 Concord Monitor in response to N.H’s recent decision to defund Planned Parenthood. Hopefully pastors throughout our nation will be inspired by Pastor Lear’s bold and compassionate stance for life and replicate it nationwide.