Churches Work To Give Homeless A Hand Up Instead Of Handout 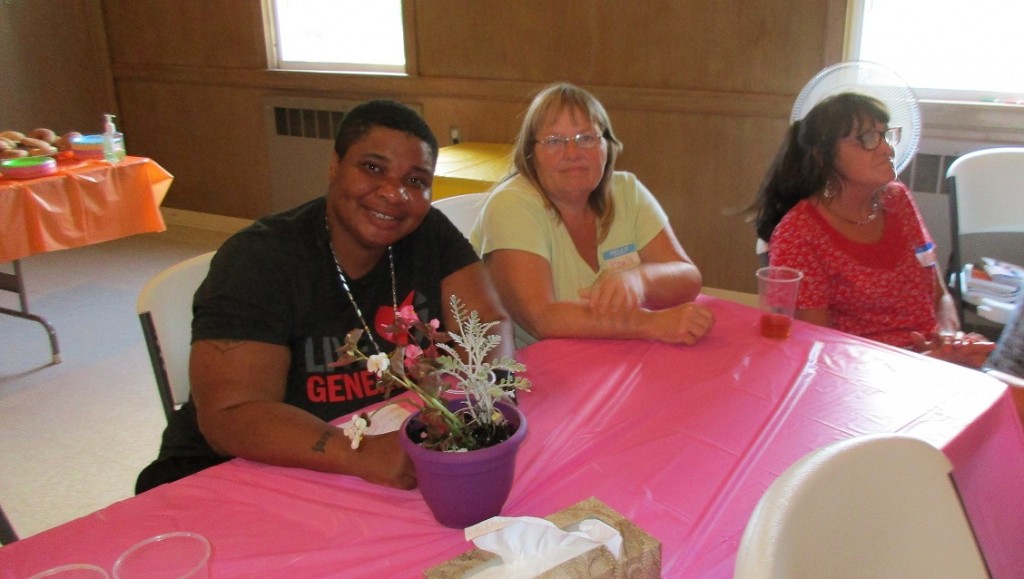 Three of the five homeless women who took the bus on July 23 to First Baptist Church in East Providence for the Women of Faith simulcast. They had stayed at the Providence Rescue Mission the night before. One of them is pregnant and was blessed to speak with representatives from CareNet Rhode Island, which was on site as part of a mini-ministry fair during the conference. Photo Credit – Kimberley T. Edgar

Program Offers Food for Body and Soul, One Effort in Toolbox of Initiatives To Lavish God’s Love on Less Fortunate

RUMFORD – The sun blazed down on First Baptist Church in East Providence, metallic red and pink heart-shaped Mylar balloons strung to the sign on Pawtucket Avenue glinting in its rays.

The previous day had been sweltering, but this day was different: A pleasant breeze stirred the balloons to bob and dance on their flimsy white ribbons while sweeping through the open windows of Fellowship Hall and bringing relief to those there.

The crowd inside – including five women who came by public bus from the Providence Rescue Mission, where they had stayed the night before – saw it as a tangible affirmation of the message woven throughout the program, in keeping with the theme of the conference: You Are Loved.

This program, a recast of the 2015 Women of Faith You Are Loved Farewell Tour, saw a partnership among several groups, including event host First Baptist Church in East Providence; Providence Rescue Mission and its catering arm, Restoration Catering; and Christian radio station, WARV 1590 AM.

“‘This is what the LORD Almighty says: ‘Administer true justice; Show mercy and compassion to one another,” said Ernie Robillard, pastor, First Baptist Church in East Providence, quoting from the Old Testament prophet Zechariah (7:9).

The homeless and their plight and other needy women have been on his and other Christians’ hearts – not just in light of the recent affordable-housing crunch, and resulting publicity as more and more men, women and children are forced onto the streets. But churches in Greater Providence have been seeking to help them for several years. 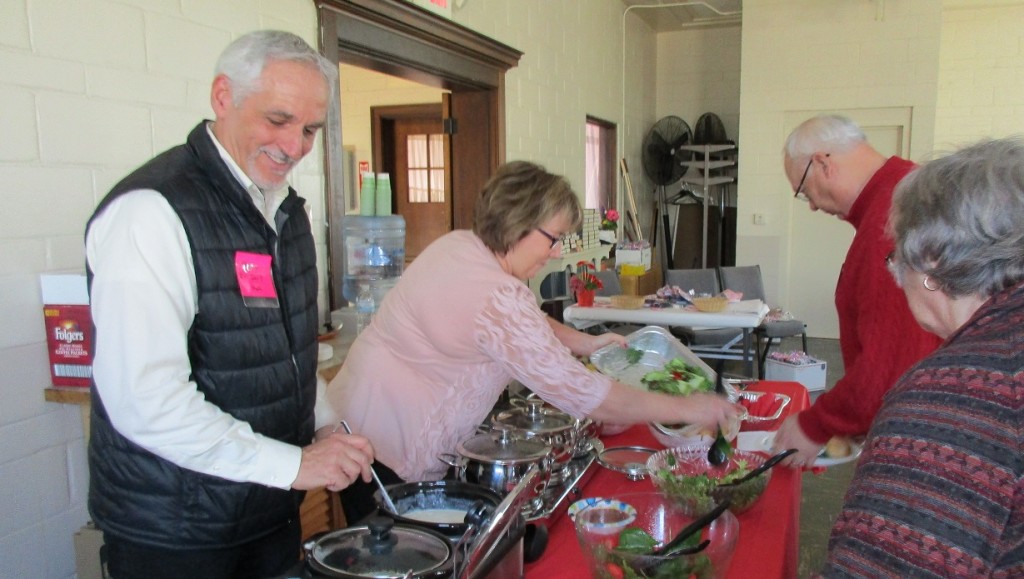 “Jesus tells us in Matthew 25:40, ‘Truly I tell you, whatever you did for one of the least of these brothers and sisters of mine, you did for Me,'” said Jim Davis, Pastor of Faith and Hope Baptist Church, in Providence.

At the 93 Stanwood St. church, leaders and members offer regular help and services to the homeless. In addition to reaching out to include them in Bible studies and worship services, Faith and Hope Baptist Church houses a food pantry and offers a clothing closet where they can find used clothing. And the church also has been gearing up to help the homeless find jobs.

Faith and Hope Baptist Church also hosted the program earlier this year, on Jan. 30, to tie in the message of God’s love with Valentine’s Day at the church. At least six women from the Providence Rescue Mission’s Grace House, a homeless woman on her own, a formerly homeless woman and other needy women and women from different churches were among 50 to 60 women attending that presentation.

The program offered at both locations, with Women of Faith’s You Are Loved recast at its center, had its genesis in November 2013, when someone put a $100 bill into the hands of First Baptist Church in East Providence’s Women of Faith Group Leader to bring a homeless woman to that year’s Women of Faith conference in Hartford., Conn. It was the closest stop on the event tour.

While the group leader was on her way to pick up a single mother who wasn’t homeless but was on welfare, the would-be beneficiary of that ticket went to Butler Hospital.

At the conference, the $100 bill was a present reminder to the group leader of the charge she had been given: Get a homeless woman to Women of Faith.

When she heard of a new opportunity to offer a Women of Faith Christmas simulcast, she thought for not much more money, she could bring Women of Faith – and their message of God’s love – to many homeless and other needy women.

Using some money from a fund-raiser she’d held to benefit three groups, including Women of Faith, she bought the program and began working with a local Christian homeless shelter to offer it in the shelter’s chapel. But the person she was working with was plagued with sickness and at least one death in his family about the time they were looking to hold the conference, so it was tabled.

The next year, she revisited it with the shelter, but again deaths, serious sicknesses and circumstances in the families of those working to organize this derailed the efforts for that year.

In 2015, the opportunity arose to offer Women of Faith’s final conference, culminating its 20-year history, in its entirety. It cost more, but another woman involved with the Women of Faith group stepped forward to cover the cost and make it available.

Originally, the steering team planned to offer it as a simulcast Oct. 2 and 3, along with other churches throughout the nation that registered to carry the event. But once more, the team seemed plagued with family emergencies of various types, so they postponed again.

The church where they had planned to host it wasn’t available, but Faith and Hope Baptist Church, in Providence, stepped forward when women there embraced the opportunity.

The generosity of some individuals and corporations made it possible to offer the event, including a continental breakfast and soup-and-salad lunch for free. The church also offered the homeless and less fortunate women brown-bag  take-home dinners and packed a box of the dinners for them to take back and share with other homeless.

And during a free will offering, after the lead organizer stood up and explained how her oldest, 5-year-old daughter had contributed two pennies – much like the woman mentioned in Scripture who contributed her two copper coins – to help feed the homeless that day, the group raised about $150 in cash donations.

Church leaders said they would bring the total to an even $200 to split evenly with donations to World Vision, featured prominently by Women of Faith, which has supported that organization, and Tin Man Ministries, a local group that seeks to help free women from the bondage of human trafficking.

“The women who attended the event at our church were clearly blessed and grateful for the opportunity to know more about God and His love for them. It seemed right to let our collective cup that the LORD speaks about in Psalm 23 overflow into the lives of others touched by these organizations,” Pastor Davis said. 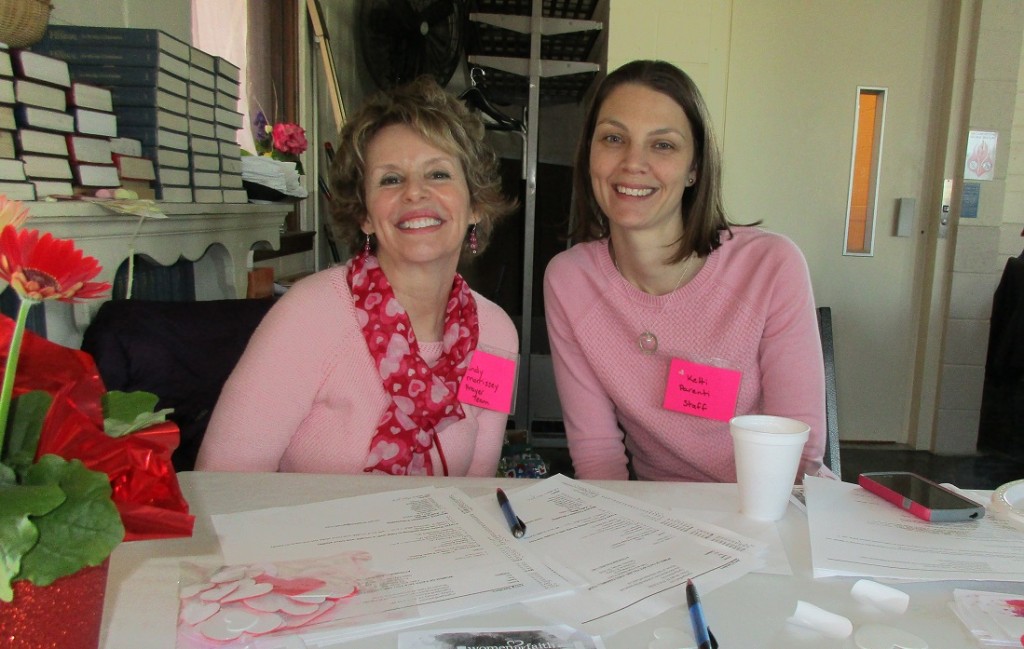 Longtime Christians Sandy Morrissey and Ketti Parente, a Barrington Baptist Church member, welcome attendees to the Jan. 30 recast of the 2015 Women of Faith You Are Loved Farewell Tour and outreach to the homeless at Faith and Hope Baptist Church, in Providence. Sandy Morrissey was responsible for securing Bibles to distribute to the women attending the conference, packaged with Gospel tracts and other goodies in take-home treat bags for the women. Photo credit – Kimberley T. Edgar

On Saturday, women walked through the doors of the church to find two women with warm smiles greeting them from behind two square card tables draped in red table cloths, a metallic purple and hot pink heart hanging from its center.

In addition to feeding soul and spirit Saturday with inspirational and encouraging messages of God’s love, First Baptist Church in East Providence also sought to feed the body, offering two meals – a breakfast and lunch catered by Restoration Catering, which aims to train homeless clients with marketable skills to help them get jobs and get off the streets.

The breakfast buffet of bagels, cream cheese and donuts – and later lunch fare of chicken, mashed potatoes and vegetables – stretched along two banquet tables draped in lightweight orange table cloths that concluded the wave of warm hues – pink, purple, red – covering tables from the front of the room to the back. The corners of the table cloths swayed gently in the breeze that kept the room comfortable throughout the day.

The backdrop behind the buffet table was a prayer wall – three plastic panels of a colorful underwater scene taped together at the seams and covered with silhouettes of jellyfish and other sea creatures children used to write and draw their prayers for homeless people after learning of their plight at a Vacation Bible School the week before, at His Providence Church, on Route 6 in Seekonk, Mass.

Atop the tables set up for seating were begonias potted with dusty millers in coordinated pots, surrounded by seed packets of different types of flowers. Each woman was encouraged to take a pot of flowers and at least one seed packet with her to sow seeds of love when she left.

Eight square card tables covered with table cloths in cooler colors flanked the room, four on each side. It is there that several ministries partnering with First Baptist Church in East Providence for this event set up their displays: Front Line Ministries, supporting U.S. troops; CareNet Rhode Island, a crisis pregnancy center; House of Hope Rhode Island, helping teenage girls in troubling situations; WARV-1590 AM, a local Christian radio station and Pray the Paper and Prayers, Squares and Teddy Bears, both homegrown ministries led by one of the women at the church.

At the front of the room, pink and purple back sacks – perfectly coordinating with the color scheme and stuffed by His Providence Church Vacation Bible School participants with toiletries, snacks and supplies a homeless person might need – were set in alternating colors at stage’s edge, the bottom border of a ceiling high white screen, the backdrop behind the lectern, microphone and sound system.

His Providence Church also raised $500 by collecting change during the Bible school and planned to use the money to buy bus passes and $5 gift cards to places like Dunkin’ Donuts to put in the bags to give to the homeless.

The message presented by Women of Faith during its 2015 You are Loved Farewell Tour resonated with every one of about 50 attendees who went to the Jan. 30 recast of the conference, including six women in Providence Rescue Mission’s Grace House program and a couple of women who were or are homeless. Women were so inspired they joined in worship of the LORD God Almighty and of our Savior and King, Jesus Christ early in the morning during the conference opening and throughout the day. Photo Credit – Kimberley T. Edgar

Each homeless woman attending received one of the back sacks. And everyone left with goody bags stuffed with a Gideon pocket Bible New Testament, Psalms and Proverbs, covered in periwinkle with silver lettering; one or two cinnamon-flavored hard candies; some literature on different ministries in the area and a loom bracelet donated by Looms for Love, a local charity founded by a girl who wanted to collect loom bracelets to give children with terminal diseases and the elderly.

At least one of the homeless women, who also is pregnant and was able to connect with CareNet, wasted no time slipping the bracelet on her wrist once she found it in the bag.

“We had wanted something to give that a homeless woman could easily take with her to remember her time with us and, most important, the message that God loves her,” Pastor Robillard said. “We received a donation of these bracelets in December, about the time our organizer was planning for the January program, and they seemed a perfect fit: They’re colorful, tangible, lightweight and easy to slip on and keep on as a visible reminder of what each woman has seen and heard and felt and received here today.”