Captain Tee-Time, the usurping Occupant of the Oval Office has finally lost all touch with reality, and officially checked into la-la land. On Wednesday, May 20th, he appeared before the graduating class at the U.S. Coast Guard Academy and proceeded to vomit the most delusional, psychotic drivel all over their pretty uniforms. He actually told them, with a straight face, that climate change is one of the most serious threats to America’s national security.

Yes, you read that correctly. The former horror of an encroaching ice-age morphed into global warming which switched dresses and became ‘Climate Change.’ This is because the propagandists can’t figure out if the planet is getting hotter or colder but, DANG IT, the temperature is changing, therefore we need to institute wealth re-distribution from rich nations to poor nations so we can all live in a communist utopia, and sing Kum-Ba-Yah forever and ever. Praise lucifer. Yeah, that’s the ticket!

I’ll admit that even the most conservative members of this country have to concede there IS such a thing as climate change. It’s called the seasons: winter, spring, summer and fall. Other than that, the planet is getting along just fine, thank you very much. Aside from our inability to keep from dumping oil into the ocean, and that whole Fukushima episode poisoning the Pacific, the global temperature fluctuates the way God designed it to thousands of years ago, and driving an SUV isn’t going to change that. 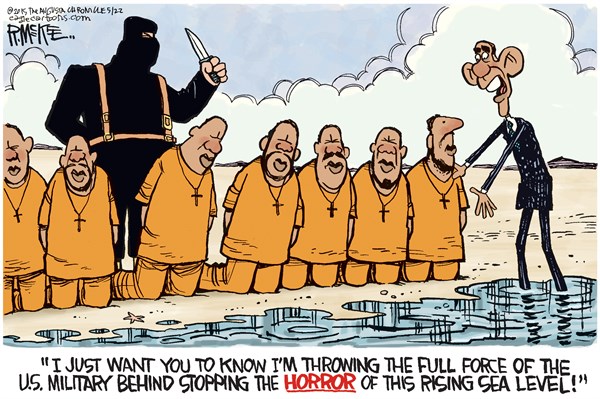 Here is his quote. Try to contain your hysterical laughter until you’ve read it in its entirety.

The graduates need to get this straight: our national borders, which are wide open to every ISIS terrorist and Mexican drug cartel member on the planet, isn’t the most pressing national security issue. The fact that we don’t revoke the passports of people who’ve traveled to war-torn Middle Eastern countries to train in terror camps, isn’t much of a concern either. Heck, we welcome them back with open arms!

The fact that the Occupant’s administration is bursting with members of the Muslim Brotherhood isn’t an issue. The deliberate purging of the most elite, most experienced, most highly decorated officers in every branch of our military isn’t a national security issue because the “Commander-in-Chief” filled those positions with transsexuals, flaming sodomites and lesbians, so we’re good to go there.

The fact that mentally unbalanced little troll in North Korea, Kim Jong-Nutjob, is boasting they have a miniaturized nuclear weapon that may be able to ride an intercontinental-ballistic missile to the shores of America, is no cause for sleepless nights either. No, the most serious national security issue facing the United States today is…’Climate Change.’ Somebody cue ‘Hail to the Chief.’ Thank heavens the Occupant has America’s best interest at heart. What an embarrassing putz he is!

How the entire class kept from cracking up at the Monty Python level absurdity of his speech is beyond me! It speaks well of their discipline and decorum. WHAT, pray tell, does he expect the military to do about climate change anyway?! Shoot it? Lob a missile at it? Drive electric tanks?

Senator James Inhofe, a senior member of the Senate Armed Services Committee is the author of The Greatest Hoax: How the Global Warming Conspiracy Threatens Your Future. He reacted to the Occupant’s pathetic attempts to resurrect this faux crisis by stating “It is kind of humorous, the desperation that this president goes to in trying to bring this issue back.”

He also said that Secretary of State, John ‘swift-boat’ Kerry is trying to get a tizzy going about it again as well. “He’s getting equally desperate. He’s been in on the very beginning of this with Al Gore and others. It has not panned out. The public knows it. The polling is now against them. He will say anything to fortify or resurrect the issue. They’ve lost the argument. I can remember 10 years ago, it was polling as the No. 1 or No. 2 environmental issue. It’s now No. 13 or 14.”

Yes, my fellow Americans, don’t give another thought to all the terrorists who are pouring into our country, awakening their sleeper cells, just waiting for the signal to attack. There’s nothing to see here people, so move along. Climate change is what we all need to lose sleep over. It must be true. After all, the President said so.