Cloudy with a Chance of Toxic Water

If crisis provides the impetus for change, the folks in Toledo, Ohio, might just be the ones who force elected officials in the U.S. to connect the dots between chemical-intensive industrial agriculture, climate change and human survival. 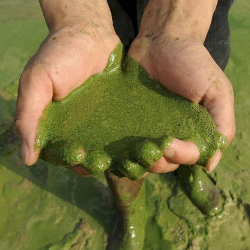 For two days in August, more than 400,000 Toledo-area residents couldn’t drink the water in their kitchens. The city gets its water from Lake Erie, part of the world’s largest freshwater system. But a combination of warming temperatures and pollution from industrial farms turned their tap water toxic. So toxic, explains Tom Philpott of Mother Jones, that city officials warned people not to bathe their kids or wash their dishes in it.

What turned the water toxic? Something called algae blooms. Where did they come from? Philpott cites a Wall Street Journal report:

The Maumee River drains more than four million acres of agricultural land and dumps it into Lake Erie at the Port of Toledo. More than 80 percent of the Maumeee River watershed is devoted to agriculture, mainly the corn-soy duopoly that carpets the Midwest. Fertilizer and manure runoff from the region’s farms feed blue-green algae blooms in the southwest corner of Lake Erie, from which Toledo draws its water.

Why did the algae blooms form? An article in the Guardian, aptly titled “Farming practices and climate change at root of Toledo water pollution,” summed it up this way:

The main cause for such algal blooms is an overload of phosphorus, which washes into lakes from commercial fertilizer used by farming operations as well as urban water-treatment centers. Hotter and longer summers also promote the spread of the blue-green scum.

City officials rushed to reassure residents that the crisis is over, even showing a video of Mayor D. Michael Collins enthusiastically chugging a glass of water.

Maybe. But scientists say the crisis is far from over.