CNN’s Don Lemon Claims: ‘Jesus Christ Admittedly Was Not Perfect When He Was Here’ 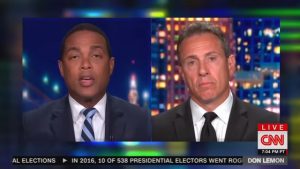 “So why are we deifying the founders of this country, many of whom owned slaves?” he asked. “And in the Constitution, the original one, they put slavery in there — that slavery should be abolished because it was [what] the king wanted and then the Congress said, ‘No way,’ and so they had to come up with an alternative about three-fifths of a man.”

Lemon made the claim about Jesus while speaking about a perceived “deification” of the founding fathers by opposing the removal of statues and monuments bearing their likeness. “We’re trying to put history in the right context,” he said in remarks leading up to the statement. “We’re trying to get you to understand that a lot of what you’ve been taught in history has been propaganda. And some things you need to unlearn so that you can become a better citizen and that the promise of what America is is available to all.”

Cuomo, who identifies as Roman Catholic, did not refute Lemon’s assertion that Jesus was not perfect.

1 John 3:5 states plainly, “And ye know that He was manifested to take away our sins, and in Him is no sin.”

2 Corinthians 5:21 similarly teaches, “For He hath made Him to be sin for us, who knew no sin, that we might be made the righteousness of God in Him.”

Hebrews 4:14-15 again outlines, “Seeing then that we have a great high priest, that is passed into the heavens, Jesus the Son of God, let us hold fast our profession. For we have not a high priest which cannot be touched with the feeling of our infirmities but was in all points tempted like as we are, yet without sin.”

1 Peter 2:21-22 also clearly declares, “Christ also suffered for us, leaving us an example that ye should follow His steps, who did no sin, neither was guile found in His mouth.”

1 Peter 1:8-19 likewise teaches, “Forasmuch as ye know that ye were not redeemed with corruptible things, as silver and gold, from your vain conversation received by tradition from your fathers, but with the precious blood of Christ, as of a lamb without blemish and without spot.”

Lemon, who has worked for CNN since 2006, came out as a homosexual in 2011 and became “engaged” to partner Tim Malone last year.