(PressTV) At least 18 people have died in Tennessee as cold-weather records continued to fall across the eastern half of the country, according to officials. The fatalities were caused by hypothermia-related conditions, car accidents or from an inability to reach medical care due to icy roads. 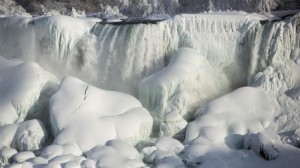 A partially frozen American Falls in sub-freezing temperatures is seen from Niagara Falls.

Cold-weather records have fallen across the eastern US as the polar vortex continues to bring high-pressured arctic air down over the country.

The deaths came as Tennessee remained in a state of emergency due to the bitter cold temperatures. “Our city just shuts down,” said Dana Marie, a waitress in Nashville, Tennessee. “You know, people in the North want to make fun. And I get it. It’s just that we’re not used to it.”

In New York City’s Central Park the temperature went below minus 16 degrees Celsius, while much of Niagara Falls was frozen over. The cold snap followed snow and ice storms earlier in the week. Weather forecasters have warned of more sleet and freezing rain in the coming days.

“There were widespread subzero overnight lows extending from Illinois to western Virginia, and numerous record lows were set,” the National Weather Service said in a statement Friday Feb 20th.  Residents in the eastern US are bracing for more power outages, road hazards and water main breaks.