(WNS)–A Colorado high school senior is suing school officials after they told him he couldn’t meet with his Christian friends during a “free period.” The group had been peacefully meeting for over three years for encouragement, prayer, and singing when officials suddenly ordered the students to stop.

Chase Windebank has been informally leading a prayer meeting with fellow students since he was a freshman at Pine Creek High School, a 4A-school in Colorado Springs. Like many high schools across the state, Pine Creek has a 40-minute, non-teaching period built into the daily schedule, which the school calls “seminar.” After teachers take attendance and read school announcements, students are permitted to leave seminar on certain days to meet with counselors, tutors, or teachers if they need extra help or to take make-up tests. Seminar also “provides a forum for students to develop meaningful relationships that enhance academic achievement, encourage positive community involvement, provide character education, and increase connectedness with school,” according to the district’s parent guide.

The broad definition allows students to “engage in a virtually unlimited variety of activities of the students’ own choosing,” including playing on their electronic devices, hanging out with friends, and both formal and informal club meetings, the lawsuit notes. 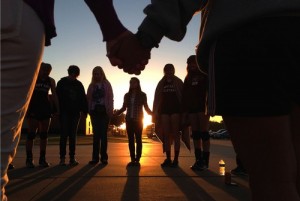 When school started in August, Windebank began facilitating prayer meetings on Mondays and Fridays during seminar in the choir room, with the choir teacher’s permission. The meeting averaged about 90 students in attendance. But on Sept. 29, the school’s assistant principal called Windebank into the office and told him he could no longer hold prayer meetings during school hours because it violated “the separation of church and state.” Windebank cancelled the upcoming meeting and began researching his legal rights. He presented his findings to the principal in hopes the meetings could be reinstated. But when the issue was not quickly resolved, Windebank enlisted the help of Alliance Defending Freedom (ADF), a pro-bono legal group specializing in religious liberty issues. ADF sent a letter to the district, outlining the situation, and asking the school to lift the ban on the prayer meetings, noting it violated Windebank’s constitutional rights.

After the district’s attorney responded, asserting “non-curriculum related groups” are only permitted to meet during “non-instructional time,” that is, before or after school, ADF filed suit in Colorado District Court.

“This censorship of Chase’s religious speech—while permitting similar, but nonreligious, private speech from other students regarding the same and similar subject matters—also constitutes viewpoint discrimination, which is unconstitutional in any type of forum,” the lawsuit states.

Local and national media devoured the story, prompting school officials to email parents to defend their position. The Nov. 10 email claimed seminar is not an “open time” for students, but rather is “counted as academic time toward the minimum hours of instruction that schools are required to provide by state law, and therefore, must be used for academic purposes.” It claimed students only leave the classroom for “curriculum-related activities,” and students are not allowed to participate in “noncurriculum-related activities, religious or otherwise, or participate in non-curriculum related clubs.”

But the district’s claims do not line up with descriptions in its 2014-2015 student handbook, which describes seminar as “open” time and notes club meetings may be scheduled during that time.

“There’s no instruction in seminar,” said Melissa Nowlin, a Colorado Springs resident with two juniors at Pine Creek and a daughter who graduated last year. “Kids check in, get announcements, leave and go hang out with their friends. Sometimes they have a pancake breakfast. Are they counting that as academic learning?”

But the problem may be in the way the school counts the time. Pine Creek gives a half-credit each semester for the class, at least partially supporting its claim the class counts as “academic time.”

On Nov. 18, the liberal-leaning Colorado Springs Gazette posted an editorial suggesting the school might have a hard time defending its position based on what it’s allowed students to do in the past.

“If the free time allows nearly all verbal activities except for prayer, an investigation by the plaintiffs’ attorneys will likely prove it,” the editors wrote. “Windebank and his friends have been meeting to pray for the past three years. By deposing a large sample of teachers and seminar students, who have been given free time during the past three years, truth should emerge.”