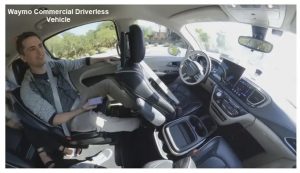 After more than a decade, Waymo’s driverless ride-hailing service is open to customers. For now, it’s free.

“Congrats! This car is all yours, with no one up front,” the pop-up notification from the Waymo app reads. “This ride will be different. With no one else in the car, Waymo will do all the driving. Enjoy this free ride on us!”  It marks the beginning of a driverless ride-hailing service that is now being used by members of its early rider program and eventually the public.

~   The company’s driverless rides are currently free and only taking place in a geofenced area that includes parts of Chandler, Mesa and Tempe, Arizona.

~  Even Waymo vehicles with safety drivers don’t yet take riders to one of the most popular ride-hailing destinations: the airport.

~  The everyday interactions between a passenger and an Uber or Lyft driver, such as conversations about pick-up and drop-offs as well as sudden changes in plans, become more complex when the driver is a computer. It’s an area that Waymo’s user experience research (UXR) team admits it is still figuring out.

~  Computers and sensors may already be better than humans at specific driving capabilities, like staying in lanes or avoiding obstacles (especially over long periods of time), but they lack the human flexibility and adaptability needed to be a good mobility provider.

I expect many readers will pooh-pooh this story with the usual nonsense about weather, old men on roller skates veering into traffic, liability issues, theft, and other silliness. The fact of the matter is this is 2019. I expected trucks, not taxis would be far in front. And they likely still are.

City driving where riders might change their minds is far more complex than point-to-point trucking from interstate hub to hub. Taxi adoption is likely to be slower. The primary thing holding up hub-to-hub trucking is national regulation. I expect to see that next year. Once allowed, interstate truck driving will quickly adopt. Commercial taxis will have a longer adoption period.

The limo service I typically take to the airport just got rid of all its limos and drivers. The drivers are now contractors and must own their own vehicles. Those who refused were fired. With that change, the owner’s business model morphed into taking a percentage of the fare for scheduling rides rather than owning any vehicles and hiring drivers. Within five years or less, those jobs will be gone.

Driverless is here. The only debate is how fast it ramps up. I suggest that within a 2-3 years of federal regulation, the majority of trucks on the interstates will be driverless. Even faster would not be a surprise.