Make no doubt about it: The US Congress, which has been absent for the past several years on both domestic and foreign policy, is complicit in using taxpayer money to expand the reach of terrorism. The Republican-controlled House of Representatives Wednesday voted 273-156 to approve the occupant of the Oval Office’s plan to train and equip “moderate” Syrian rebels to counter the threat of the Islamic State and to overthrow the government of Bashar Assad. The trouble is, it is proven repeatedly that there are no moderates to arm. These Islamists will take our training and our money, as they have in the past, and go off on their own radical mission, likely joining the Islamic State.
The Washington Post reports, “Every ideological corner of the House found reason to doubt the mission, portending a lengthy debate in November and December over an expansive use-of-force resolution…Duncan D. Hunter (R-Calif.), a Marine who deployed to Iraq and Afghanistan, said the authority “does nothing” to destroy the Islamic State. Rep. Tulsi Gabbard (D-Hawaii), a captain in the Hawaii National Guard who served in Iraq, called Obama’s strategy “unrealistic” and worried “it will take way too long” to work. Rep. Jim Moran (D-Va), a controversial Democrat and shyster, said “It’s the best choice of worse options. It’s because there are no better alternatives and I don’t think it’s responsible to do nothing.” 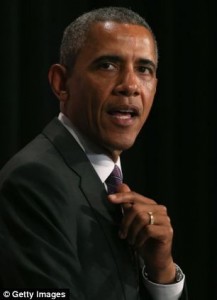 Congress and this “president” are doing the same thing over again that they did with what enjoined a fledgling Islamic State–train Islamists on US tactics, give them US weapons, and point them in the direction of what the West perceives as the bad guys–Only to have them join the bad guys because they are bad guys to begin with. They voted with serious misgivings to give this “president” authority to arm more Islamists in the Middle East. The long term impact of this plan is to bolster the ranks of the IS caliphate and consolidate its presence in Syria, Iraq and the Levant (which includes Israel). There is no way to defeat IS by training and equipping Islamists to do it. They are bound by their religion.
We have a “president” who is now using a Congress to continue Arab Spring and ultimately arm and fund Islamists that will most likely join the IS caliphate rather than destroy it. It is widely reported that the moderate groups the “president” wishes to train and arm already have a non-aggression agreement in place with IS. The “president” says this is not true. It has been reported, however, by several credible outlets that are independent of one another. Bottom line: Congress and the White House are complicit in arming the enemies of America and they are using your tax money to do it. As the Lord said in Joshua 7:13, “There is an accursed thing in the midst of thee.” And we cannot stand until it is gone and we are sanctified.