Six U.S. representatives first introduced the House resolution on April 29 to the House Foreign Affairs Committee. A few days later, Abedini’s wife, Naghmeh, and relatives of other Americans imprisoned in Iran testified before the committee. Naghmeh Abedini pleaded with lawmakers to save her husband before it is too late: “The aim of the Iranian government is to break Saeed before they have to release him.”

Four of the six representatives have constituents who are related to Americans missing or detained in Iran.

“If Iran is serious about rejoining the community of nations, about being a member of the international community, they will immediately release Amir Hekmati and the other Americans that they hold,” said U.S. Rep. Dan Kildee, R-Mich. 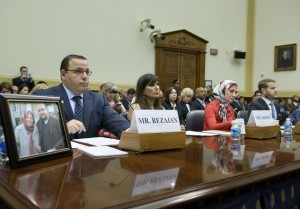 Before Monday night’s vote, Rep. Eliot Engel, D-N.Y., said the hostage situation “casts a pale on any agreement we have with Iran,” referring to ongoing nuclear negotiations. The Obama administration wants Iran to restrict its nuclear programs in exchange for sanctions relief. The Senate will review and decide on the proposed deal by June 30, but President Barack Obama has veto power. The American Center for Law and Justice, legal counsel for Abedini’s wife, is aggressively collecting petition signatures for his release in case the Iran deal passes.

Some lawmakers fear the Obama administration is willing to compromise the American prisoners’ release to achieve Iran’s cooperation in nuclear negotiations. Kildee stressed the United States cannot trade American citizens’ freedom for “a concession at the nuclear negotiating table.”

Saeed Abedini is a Muslim convert to Christianity expelled from Iran in 2009 for his humanitarian and evangelism efforts. Iranian soldiers arrested Abedini during a family visit in Iran in 2012. The government sentenced him to eight years in prison for undermining national security through his evangelism activity years before. Since Abedini’s arrest, he has suffered abuse in prison by guards and fellow inmates.

Obama discussed Abedini’s case with the Iranian president in 2013 and mentioned him during the National Prayer Breakfast in February 2014.

Kildee said we must not forget the names of the American prisoners: “These are individuals, they are not just pawns in a geopolitical struggle between Iran and the rest of the world.”