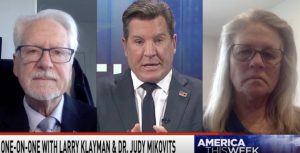 The national corporate media giants like CNN, along with Big Tech, are trying hard to censor a video produced by America this Week with Eric Bolling and distributed to local media sources via the Sinclair Broadcast Group.

The video is an interview with whistle-blower Dr. Judy Mikovits and her attorney, Larry Klaman, where Dr. Mikovits is claiming that Dr. Fauci was manufacturing coronaviruses in monkey cell lines at Ft. Detrick in the U.S., a biosafety level 4 facility, and shipping them to Wuhan, China.

CNN may have unwittingly drawn more attention to the show than it would have otherwise received by publishing an article condemning the host, Eric Bolling, who used to work for Fox News, and also slandering both Larry Klaman and Dr. Mikovits in an effort to discredit them.

One of the sources who also condemned the interview is an organization called “Media Matters” who also embedded the video of the interview, which has now been deleted from Facebook, as well as local affiliate WJLA ABC 7, where the video was originally published.

ERIC BOLLING (HOST): Larry Klayman is the founder of Judicial Watch and Freedom Watch. He’s teamed up with Dr. Judy Mikovits, who worked with Dr. Anthony Fauci and is an expert in virology. I spoke to them both recently about the potential legal action they are seeking against Dr. Fauci. Then I brought in Dr. Nicole Saphier to weigh in on all their allegations. Take a listen.

BOLLING: Dr. Mikovits, tell me about the — what you believe Dr. Fauci has done wrong?

JUDY MIKOVITS: I believe Dr. Fauci has manufactured the coronaviruses in monkey cell lines and shipped them from and paid for and shipped the cell lines to Wuhan, China, now for at least since 2014. He published that fact and funded the studies that were published in 2015 in Nature Medicine that stated that the original cell line the Chinese used to grow the virus was shipped from Ft. Detrick, USAMRIID, the biosafety level 4 facility there.

BOLLING: Doctor, that’s a pretty hefty claim. You’re claiming that there was a virus that Fauci discovered, the coronavirus — again, there are many coronaviruses — but he shipped this specific version to China —

BOLLING: And then somehow it leaked? Tell us.

MIKOVITS: No. I’m not saying that he discovered it, I’m saying they were manufacturing these animal tissues. They were using these animal tissues at Ft. Detrick, and this has been done for decades. It was illegal in this country, so instead of continuing the work there, he funded the studies. He’s the head of NIAID. He didn’t discover this particular coronavirus, but they had been working on isolating coronaviruses from bats, both at USAMRIID since the mid to late ‘90s, and they had shipped — originally funded the studies to Wuhan, China, when it was illegal in this country to do these types of studies further.

BOLLING: All right, let’s bring you in Larry, let’s talk about the law here. What is your claim and, you know, how is it steeped in law?

LARRY KLAYMAN: Well we’re looking at a possible RICO case, Eric, and we’re analyzing that right now, but what it appears happened is the Chinese got that virus. And we know that $3.7 million was given as a grant during the Obama administration to that Wuhan laboratory, that’s not in dispute. And the Chinese then engineered it into a bioweapon. So what happened here, actually, is relevant to our lawsuit in Dallas, Texas, our class action against the communist Chinese who are releasing, either accidentally or by design, this pandemic. So, it’s a very serious matter, and it needs to be looked into. No one wants to discuss it, and I suspect the president probably knows about this right now, which is why — and I support the president personally, but I don’t think that’s why he’s — I think that’s why he’s going not real strong against China right now, because this virus actually had its origins, apparently, in a lab in Ft. Detrick, Maryland.

BOLLING: And Larry, we know about the funding the Obama administration sent to China, the Wuhan lab, but allegedly it was for discovery of a vaccine of this exact virus. Earlier, the doctor talked about something that Fauci may have been doing, experimenting here illegal. Tell us about that piece of it.

KLAYMAN: Well, let me just say this. I think one thing the left and the right have in common these days, Eric, is that we don’t believe a word the government tells us. And the fact that they claim they’re looking for a vaccine — you know, they were doing research, and Judy could talk about this more, at Ft. Detrick to combat bioweapons. OK, so, they weren’t there just for vaccines. I mean, they were there for a number of different reasons. But let me turn it over to her because she’s the expert here.

MIKOVITS: Ah, yes, Eric, these — since the mid ‘90s, we’ve been working with Ebola and other strains of viruses from bats and animals. And we — I did that work at USAMRIID, that means U.S. Army Research Institute for Infectious Disease. So we were doing those studies, allegedly then, to provide vaccines or therapeutics, but we were working, mixing animal tissues in these human cell lines, the exact same cell lines used in China. And these viruses have escaped before, the Ebola strain in 2014 that killed 21,000 Liberians came from that same USAMRIID facility in Ft. Detrick, Frederick, Maryland.

BOLLING: All right, we’re going to leave it there. I think there’s a lot more as we go forward. Larry, you’ve been talking about suing China for quite a while now, you’ll keep us up to date on where that legal proceeding is headed and where it is. Larry Klayman everybody, Dr. Judy Mikovits. Thank you very much for your time.

Plandemic has been banned and censored by most main stream media, but by some estimates has been viewed by over 1 BILLION people in the past couple of months. You can watch the Plandemic film at healthimpactnews.com/plandemic