With no government funding, Lois Lee has made Children of the Night a haven for young women fleeing prostitution

(WNS)–Wearing a Chicago Bulls jersey and a shy smile, 16-year-old Sarah from the Midwest (name changed for protection) calmly tells me how a “so-called best friend” introduced her to a pimp who threatened her into prostitution and plied her with drugs. Through the intervention of her mother, police, and a court advocate, Sarah flew to Los Angeles and found a new home at Children of the Night (COTN), a shelter for 11- to 17-year-old ex-prostitutes.

Children of the Night is not a Christian organization, but Christians can learn from its executive director, Lois Lee, and her 35 years of working with young women and men in trouble: She’s rescued more than 10,000 children from prostitution, and sent 100 of them to college. She’s developed a nationwide law enforcement network that helps prostitutes who call COTN’s 24-hour hotline. And she knows what it takes to run a 24-bed shelter that provides psychological help, education, and security—all without government support.

Sarah told me her story as Lee listened in and occasionally interrupted: Stop calling the man “my pimp,” she said. Call him “a pimp” to create distance between you. “You don’t want to be that close, right?” Sarah agreed and was careful not to use the possessive pronoun again. She’s 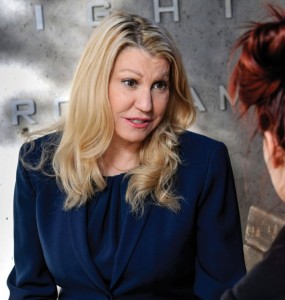 benefited from COTN’s strict schedule and on-site school: After four months she is getting clean, is on track to earn her high-school diploma, and plans to go to college to become a certified nurse assistant: “I never thought that I’d be able to make it and finish school.”

Lee’s work with child prostitutes began in the 1970s as she did research for her doctoral dissertation. By going through arrest records she discovered that police officers typically arrested prostitutes but not their customers, so she decided to sue the department for discrimination. As she interviewed and befriended prostitutes, they started turning to her with their problems.

One night in 1977, Lee received a call from a prostitute who said her friend had gone to meet with a client and had not returned. Lee tried but couldn’t get the police to care about a missing hooker. The next day the girl’s body was found, murdered by the Hillside Strangler, who killed 10 women in a four-month period. Outraged, Lee went on national TV and asked sex workers to call her if they had information, and she included her phone number. Her phone started ringing with tips that led to the capture of the two men behind the stranglings.

After the Strangler case, Lee continued receiving phone calls—many about child prostitutes. When Lee looked into government services, she found the children were falling through the cracks: Social services wouldn’t take them in because prostitution is a crime, and the juvenile court wouldn’t detain them with common criminals because they didn’t commit a crime against property.

With nowhere to turn, Lee from 1979 through 1981 opened up her home to 250 child prostitutes. Some ended up back on the streets, but others left their pimps and old lifestyles behind. Businessmen who heard about the work Lee was doing gave her the money to open a drop-in center in Hollywood. That allowed more kids to come for showers, food, and clothes. In 1984 President Ronald Reagan took notice, honoring her at the White House with the President’s Volunteer Action Award.

COTN NOW SITS IN A SPANISH-STYLE building in Van Nuys, a majority-Hispanic suburb in the San Fernando Valley section of Los Angeles. The building’s signage is discrete. Security cameras and a buzzer system at the front door protect against pimps trying to reclaim their livelihood. A young woman at the front desk answers the center’s 24/7 hotline, receiving calls from prostitutes all across the country. The scripted emergency response aims to get the child away from the pimp and the help of nearby police to come and pretend to arrest the child.

Some COTN residents, like Sarah, come via court advocates and law enforcement. Others find the hotline number through ads on an online classified section where prostitutes sell their services. As Lee walks down halls lined with the names of children who have finished high school or received GEDs, she compares the shelter to a middle-class boarding school. The residents share a bedroom with one other person, attend class during the day, eat in the dining hall, and meet with case managers who arrange for medical and counseling appointments.

In the evenings they attend workshops that range from yoga to arts and crafts. One girl told me she most enjoyed the time a backup dancer for Justin Bieber came and taught the girls a dance routine. On the weekends they take trips to the aquarium and roller rink. Some attend church on Sundays and play softball. Unlike government-funded programs, COTN allows participants to stay not for just 21 days but as long as they want. Most stay until they get their high-school diploma, have a place to stay, and are on a path toward a career. About 30 percent of those who start the program end up back on the street.

Another difference between COTN and most government-funded groups: COTN doesn’t try to take formal custody of children from their parents. “A lot of parents are not bad, they just have so many heavy issues that they need to figure out themselves,” Lee said. Each week the case manager sets up phone calls home, and as relationships improve, the children are allowed home visits.

On the day of my visit, the girls took a break from class and flopped down on couches surrounding a TV. A bright mural hangs over the couches, next to a row of computers and a cabinet piled high with board games. Only a printed list of forbidden TV shows and movies—Sunset Strip, MSNBC Sex Slaves, COPS, any talk show—gives clues to what its inhabitants are trying to forget.

Lee says that after 35 years, people now talk more openly about prostitution but law enforcement still drags its feet. FBI stings and pimp tracking on the internet are rarely successful. Pimps are difficult to prosecute and often end up back on the street. Mistrust between prostitutes and police is high, and many women return to their pimps after being “rescued.”

AT FIRST LEE FOUND IT HARD TO interest people in funding her work. She shied away from government money because of its stifling rules and regulations. She said she knows better than government bureaucrats how best to spend the money that comes in. Even if she was inclined to accept federal money, it wouldn’t work well with her clients: The government typically gives money per head per month, but child prostitutes often run away, making it difficult to keep money flowing in.

Yet surviving off private donations means Lee is always throwing fundraisers, speaking to groups, networking, and writing grant applications. Every time she walks into a hair or dentist appointment, she walks out with more volunteers to help the shelter’s children. Money often comes in through wills and trusts, and the AIDS epidemic prompted a lot of donations.

COTN has also had a strange bedfellow: Playboy founder Hugh Hefner, who normalized the commodification of women by popularizing pornography.

What to make of that? It’s true that at a time conservative funders had never heard of Lee, Hefner funded and ran ads for COTN, and got a documentary made about her. The Playboy Foundation grants to COTN have been a great investment for him, leading to oodles of positive press and a “Hero of the Heart Award” from COTN. Hefner introduced Lee to wealthy celebrities like Johnny Carson, who ended up giving millions over the years, and Lee has reciprocated with over-the-top laud: “You have been a saint to countless American children who had nowhere else to turn to for help.”

Sitting in her office with framed certificates lining the wall, Lee ticks off her responsibilities as executive director: picking bugs out of a girl’s hair, paying for the girls’ complete medical and psychological care, creating a shelter security system, paying for around-the-clock staffing, and ensuring each girl gets individualized education. Lee remains “on call” any time of the night or day through a remote video system installed on her computer. None of that is possible without funding, so Lee also has to solicit donations and make it possible for donors to visit the shelter and see exactly where their money is going.

“People walk in, they see my office and go, ‘I want to be you,’” Lee said with a laugh. But those who know her see a different story. “My lawyer said to me, ‘Who would want your life?’ … There’s no elevator, you have to take the stairs.”

Lee says many people talk about creating similar shelters in other cities. She’s met people who have passion but lack the qualifications or understanding to make a shelter work. Sometimes they lack the funding to build an adequate shelter or to earn the needed certifications. She’s seen government-funded shelters with fancy brochures and nicely designed websites, but they won’t let her visit their facilities: “Why would I send a 12-year-old to a place I can’t see?”

She’s also seen firsthand how quickly something can go wrong. Once while on vacation, she received a call from a frazzled staffer. A girl had gotten upset, picked up a computer, and swung it by the cord—destroying everything in the room. By remote video intercom, Lee told staff members how to deal with the girl and instructed them to call the police. But in their panic, the staff forgot Lee’s emergency script that gets police to the shelter in three minutes. Instead, it took 45 minutes before the cops showed up. By then the girl had inflicted $20,000 worth of damage.

“I have written 300 pages of training manual [material] of what to do and how to deal with the population,” Lee said. “If you follow everything to a tee, it all works. If you drop a piece, it doesn’t work. … So you’re always on the brink of major disaster.”

Lee thought about the technology and personnel needed to expand her work. She’s created an online GED program, called With Out Walls (WOW), that helps anyone on the streets prepare for the test and everything that entails—including helping them find a shelter or library with internet access to take the course and pointing them to programs that can help them get clean. She’s also helping to start COTN-like programs in Italy, England, and the Philippines, using existing Catholic charities and structures run by nuns and priests willing to make a lifelong commitment to helping child prostitutes.

Lee knows that child prostitutes often came from abusive and broken homes, so they’ll do anything to please pimps who not only feed and house them but claim to love them. That’s why, despite rampant abuse, prostitutes will often return to their pimps. Lee said she first realized she was making an impact in the 1980s when she heard one boy asking another if he was a “cotton kid.” When the boy explained to Lee, “A cotton kid is a Children of the Night kid,” she asked why he used the word cotton. He replied, “C-O-T-N and cotton because it’s soft.”