(WNS)–A Washington state judge ruled Wednesday that a Christian flower shop owner is required under state law to provide full services for same-sex wedding ceremonies, even though it violates her faith.

Barronelle Stutzman sold flowers to gay couple Robert Ingersoll and Curt Freed for more than nine years, and considered Ingersoll a friend. But when he asked her to create the flower arrangements for the couple’s wedding in 2013, the great-grandmother said she couldn’t because of her “relationship with Jesus Christ.” She referred them to another business for assistance.

The Washington state attorney sued Stutzman for allegedly violating the Washington Law Against Discrimination and its Consumer Protection Act. Ingersoll and Freed soon filed their own lawsuit against Stutzman. The ruling settles both suits by summary judgment in the plaintiffs’ favor, preventing the case from proceeding to trial. 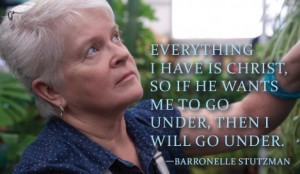 “On the evening of Nov. 5, 2012, there was no conflict [between state law and Stutzman’s faith]” Judge Alexander C. Ekstrom said in his ruling. “The following evening, after the … enactment of same-sex marriage, there would eventually be a direct and insoluble conflict between Stutzman’s religiously motivated conduct and the laws of the State of Washington. Stutzman cannot comply with both the law and her faith if she continues to provide flowers for weddings as part of her duly-licensed business.”

In January, the same judge ruled both the state and the couple had the right to collect damages not only from Stutzman’s business, but from her personal assets, as well. The judge has yet to rule on the amount of damages Stutzman will owe. Ingersoll and Freed sued for $7.91, the cost of the gas needed to drive to another florist. But Stutzman could face state fines of up to $2,000 and the cost of legal fees.

“A government that tells you what you can’t say is bad enough, but a government that tells you what you must say is terrifying,” Kristen Waggoner, an Alliance Defending Freedom (ADF)-allied attorney, said after the ruling. “The lesson from the court’s decisions is that you put your home, your family business, and your life savings at risk by daring to defy a government mandate that forces you to promote views you believe are wrong.”

ADF vowed to appeal the ruling, asserting that for the court to force Stutzman to “create expression” against her will ignores the nation’s pre-eminent civil rights law: the First Amendment protections for free speech and free exercise of religion.

“The government is coming after me and everything I have just because I won’t live my life the way the state says I should,” Stutzman said. “I just want the freedom to live and work faithfully and according to what God says about marriage without fear of punishment. Others have the freedom to say or not say what they want to about marriage, and that’s all I’m asking for as well.”

According to a new Associated Press-GKF poll released Feb. 5, Americans narrowly favor allowing same-sex couples to legally marry, but most also believe wedding-related businesses should be allowed to deny service to same-sex couples for religious reasons.